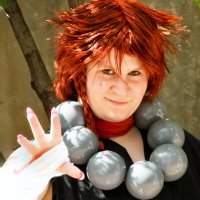 I've always been a fan of the show, and when I realized the convention was about a week or two away I figure I'd better start getting cracking on something to wear! After reaching my goal with my last costume, I felt that I just wanted to make a costume for the hell of it this time rather then for competition. Feels good to do it for the fun of it!

I ended up using red tag clearance fabric for the cape and shoes -- I was surprised to find something that was blue on the outside and black on the inside, so that helped without putting in a lining. Used Mccalls' 2853 cape pattern for the cape. The boots were old boots I had to cut down and modify for the covers -- the covers were being a super dick to make, so I ended up just keeping the heel open and handsewing them shut up the back.

The belt was made out of yellow ribbon, painted wooden disks and $.25 cent ball capsules!

The wig was being a dick and not taking my sharpie dye, so I ended up coloring the wig by hand. Alot of the color came out in the rinses, but it doesn't look too bad. As long as I keep the hood up, you can't really notice^_^ I'm planning on getting a different wig after this.

The leotard and tights were bought, I was too busy to make a leotard from scratch.

I really like this costume because it's covered and I always love a good strong female comic book character! All the materials were either on hand at the time, I'd say cost-wise I didn't pay more then $25 for all the materials. Hooray for recycling! 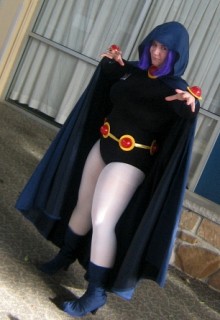 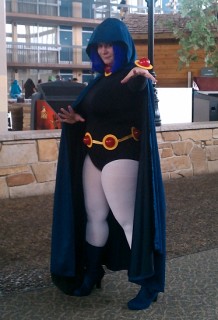 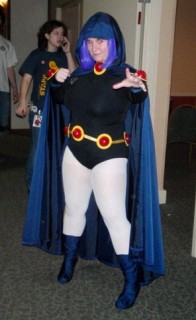 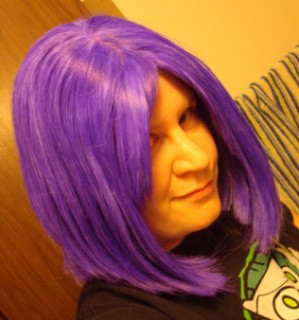 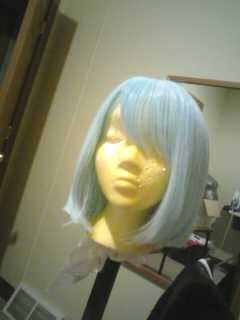 CourtoonXIII You make a wonderful Raven! Everything on your costume looks really well done!