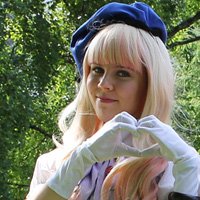 Well, yes, Tarta. Were it not for a friend, who pursued me to do a T&T pair cosplay with her, this certainly would NOT have been my first choice for our MKR group. Somehow I ended up with the younger sibling, although based on me and Strawwie's ages and heights, it should've been the other way round... Personality-wise, however, I believe we made the right choice with the characters!

This cosplay gave me a good reason to FINALLY grab the 2nd season from the DVD shelf, where it'd stood for months without having ever been watched. Though I still prefer the first season, I did grow to like the two Chizeta princesses a lot. So, I was ready for the challenge!

Although complete, I'm hoping to make improvements on this costume in the future. Below is a costume breakdown based on the current version.

The top & wrist bracelets: Constructed of blackout curtain fabric - not kidding here! The thing is, Strawwie (Tatra) and I wanted to the costumes made in the burnt orange shade as seen in some manga art, but we soon discovered that it was hard to find fabric for this that would be at the same time both the right color and "majestetic-looking" (eg. satin). Then, one day, I was browsing fabrics at a discount with friends, and it was then that Feeniks discovered a piece of red-orange blackout curtain. I bought the entire thing, although at the time not sure if it would end up being used... but it did! The top is fully lined and has golden bias tape on both edges. There's no zipper (the top can be slipped on from above the head). The wrist bracelets are made of the same fabric (they aren't lined though) and can be fastened with adhesive tape.

The bottom & the "belt": The bottom was made of the same red-orange blackout curtain fabric as used in the top and, similar to the top, is lined. I patterned the bottom with the help of old undies (xD). Compared to the resource images, I made them more "hipster-like" on purpose. The "belt" is made of two layers of black blackout curtain with golden bias tape on the sides, and it was directly sewn the top edge of the bottom. The hem (or whatever you want to call it) is made of two layers of golden yellow chiffon. At the same time with sewing (or "folding") the second edge of the bottom bias tape, I attached the hem to the belt. (Not that it was the best idea to do this around 3 AM in the morning...) Below the entire bottom thing, there's a "hatch", so again, this can be put on from the above. Oh, and red the tassel attached to the bottom of chiffon: it, too, is self-made, and the yarn used contains Egyptian cotton. <3

The wig: My first attempt of doing a crazy hairdo and without a doubt the most time-consuming part of the costume. I purchased three red wigs - two very long ones for the extensions, and a shorter one for the base - and combined them using Kukkii-san's ponytail tutorial. In order to create the "poofy" effect, I used a styrox egg. The hair ornaments/bobbles were constructed of bias tape (the upper one is reinforced with a strap of craft foam). The result isn't bad for a first try. However, if I ever were to remake the wig (which I probaby will not), I would definitely invest in higher quality wigs, since lower quality wigs (like mine) tend to have short fibres mixed with long fibres. In my case, not only did this bring extra challenge to pulling fibre up to a ponytail, but also resulted in a relatively thin wig.

The arm bracelets & the necklace: I used craft foam for both the bracelets and the necklace. The bracelets consist of one layer of craft foam, with added details made of the same material. The necklace consists of two layers of craft foam in addition to one extra layer for the outer border. The "base" for the gem was constructed of light mass (air-drying) and, once dry, sanded. The three golden balls were found at a crafts store (HobbyPoint). Both the armlets and the necklace were reinforced with a couple of layers of cotton fabric, and all surfaces (excluding the gem) were painted with gesso and acrylic/miniature paint. The necklace chain is made of wire covered with acrylic paint.

The shoes: A combination of base sandals (eBay), blackout curtain fabric, leather, bias tape and decorative gems. The shoes are my least favourite part of this costume, since were totally last-minute. Will probably remake them at some point!

The tan: Water-soluble Grimas make-up. It colors your clothes, too! :D

Special thanks to Nicara for helping out with some last-minute tasks, such as attaching the tassel to the chiffon hem and finishing the lower ornament of the wig! I also owe my gratitude to Feeniks (Emeraude), Koochie (Presea) and Nicara, who've provided help with applying the tan and putting the wig on whenever needed.

And so, after a couple of years, we ended up organizing a new MKR group for Tracon 8 (2013)! Since the first version dated back in the year 2011, I've made several improvements on the costume. There are still some things that I might end up fixing, hence the version number "2.0".

Improvements made for version 2.0:
- Remade the top, the bottom and the sandals. Basically, I simply took everything apart and reassembled the old materials (except for the bias tape parts, which I replaced with new ones).
- Remade the bracelets for both me and my sis (Tatra), using wonderflex and golden spray paint.
- Exchanged the gold chains of the necklace. The new ones are actually identical to the necklace I used for Leetah's travel outfit and, similar to the bracelets, are spray-painted.
- Added some wefts for the ponytail and sewed coin decorations into the bottom hair ribbon.
- Sewed an additional prop - a scarf! It's in no way related to the series, but merely an idea pulled out of my head. The scarf is made of yellow chiffon (identical to the one used in the bottom part), golden trim, and various decorations purchased from both eBay and local craft stores. 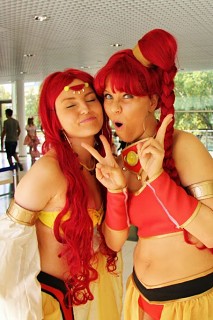 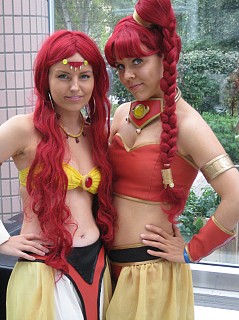 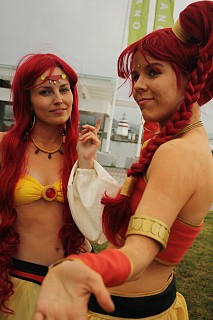 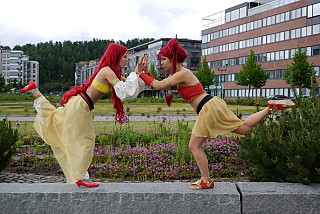 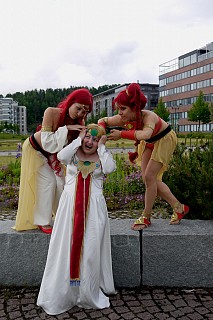 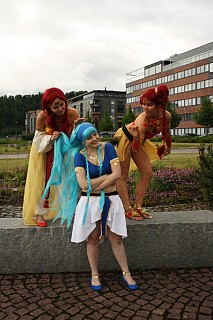 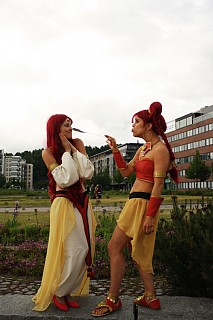 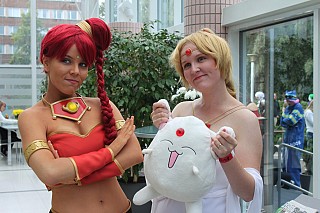