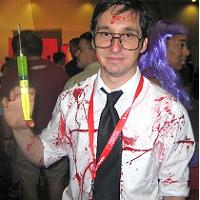 This was a pretty easy costume to put together. I basically used a white shirt, black dress slacks, and black tie I already had. The glasses I bought online after browsing through hundreds of frames til I found the ones closest to Herbert's distinct 80's frames. I bought fake blood at a local costume shop and got a nice varied blood spatter pattern going on and added a nice drizzle on the shoulder to add to the variation.

I used a Chefmate flavor injector as the syringe. Originally didn't want to mess with cutting open a glowstick and was using Jarrito's lime soda pop (flat of course). At the last minute I bought a glowstick and opened it up only to find it wasn't enough fluid to adequately fill the syringe. I ended up using a mixture of the lime soda and glow formula which was initially pretty cool but the next day was visibly separated in the syringe. 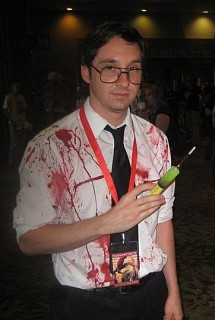 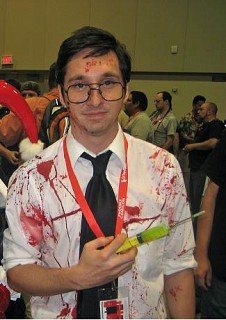 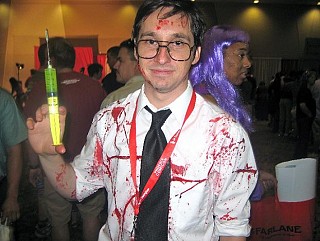