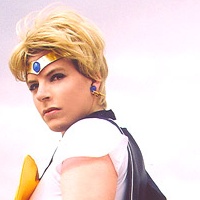 I attend a very small but very fun convention called Anime Fannatiku in St. George UT every year. Over the years I've made friends with a lot of the cosplayers that attend. A few of them decided to stage a Tsubasa and XXXHolic themed "takeover" of the con and were nice enough to include me in the action. In our scripted takeover, a fangirl ends up stealing Fai and dressing him up like he was a part of the Takarazuka Revue. At first I thought I'd just wear my Der Tod or Phoenix costume with the Fai wig and have a few laughs. That was before Katie (our amazing Sakura of the group) showed me a little sketch she'd made - Fai's iconic robe turned into a tuxedo. I was in love from the start! Thus SparkleFai was born.

I made most of the costume from heavyweight low-sheen satin. I used the only tuxedo patten I could find in local stores - a Burda pattern that's actually fitted for women, not men. I heavily modified the jacket because I didn't like the original cut, but other than that the costume mostly follows the pattern to a T. The designs were created by Heat n Bonding confetti dot fabric to the satin, then attaching the sequin border via applique stitch. I'd done this before with Demando but I think I did a better job this time :). It was a very tedious process but the end result is sparkly and I love it! When I first wore this outfit I was unhappy with how short the jacket was in front. I have since lengthened it by adding some confetti dot panels to the front.

There's not much to say about the wig. I did it the same way I do most boy-styles - start with a thick shoulder-length wig and chop layers into it.

If you're not a Takarazuka fan you're probably wondering what my prop is supposed to be. It's a shan-shan - every member of a Takarazuka show carries one at the end of a Grand Theatre performance. They're generally in the shape of a bouquet or a small shield. I chose to use the Tsubasa emblem as my shan-shan. I thought about making one in the shape of Fai's staff but in case other members of my group make Takarazuka-inspired Tsubasa costumes it's probably better than I went with this. It's made from wood, foam and leftover fabric from Myu Uranus, not to mention many yards of shiny ribbon.

This costume is not perfect but it is very special to me because it represents many friends I've made over the years. Sure, it's an absolutely ridiculous idea but it's a silly idea based on all the fun times we have together! 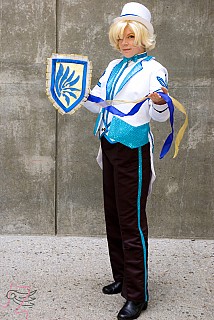 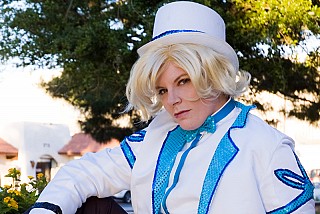 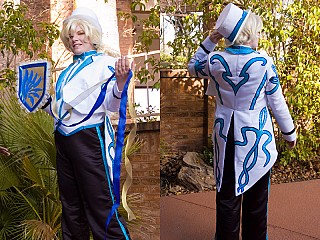