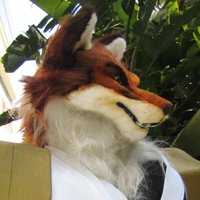 Eduardo is a character from "Foster's Home for Imaginary Friends". He's built as a big, hollow shell, split at the belt. Wayne is performing him: to get in, he steps into the legs and feet (there are shoes built into the bottom) and then Eduardo's top half is lifted onto him, with velcro all around the belt to secure the top in place.

Eduardo is another seemingly simple design that I needed to put a lot more work into than I expected. while the body shape is fairly simple, the size increased the difficulty of everything (he needed to be approximately to scale on the other characters).

I used a fairly rigid, evac-foam for most of the body and poly foam for the legs and arms. Again collaborating with Lynette, she covered Eduardo in cheap, purple shag fur (fortunately Eduardo is -supposed- to look kind of scruffy). Lynette also did most of Eduardo's face. I had sketched out the design on the foam and she sculpted the actual face and ventilated the heck out of the body (holes, holes-- everywhere!). If the performer pulls his arms in, squeezing the body-- air is forced in and out like a bellows.

The biggest nightmare for Eduardo was logistics: Lynette is in the midwest...I'm in L.A. We originally thought we could just roll him up-- but that created a shipping headache (too rigid, too big). Eventually, I cut the body pod to pieces and shipped them to Lynette, who glued them back together again. When she shipped him back, she did the same and I glued Eduardo back together on this end and stitched up the fur.

Eduardo is also airbrused: the texture on his horns and the black "spotting" on his body (that isn't very visible in the pics).

This costume has mobility problems but decent vision. Fortunately, we can kind of roll him up and Wayne quickly gets into the costume at the site. Kids love him! 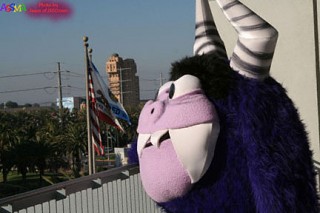 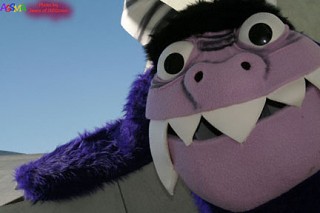 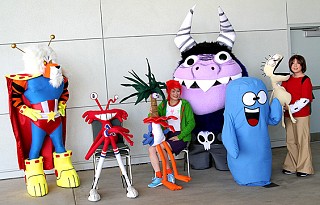 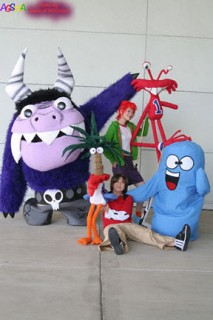 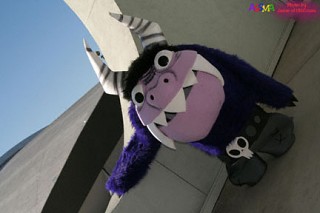