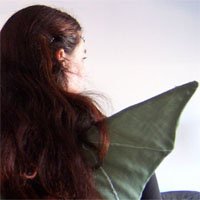 My first piece of anime cosplay costuming, my first real finished cosplay, and entirely too much fun. A Nanao really does need a Shunsui as an accessory, and I was lucky enough to have one -- and one who'd take beatings, at that.

But to the costume: the white kosode's cotton muslin, gusseted in the underarms; the black kosode's the same pattern, but with the slit underarms, and made of raw silk. Hakama was purchased and is cotton; tabi and waraji were also purchased, though I've plans to make my own tabi later when I've time. Both the book cover and the fukutaichou badge were made of mock suede, decorated using a woodburning tool. The sash for the badge is cotton, secured with velcro, and the obi is habotai silk. I've also got a fan (for beating on Kyoraku-taichou when I'm feeling too charitable to use the book), a lovely painted silk thing in pink and cherry blossoms. The hairclip being used is a wooden hairslide-type affair, which worked when added to a half-dozen smaller clips, two hairbands, and a ton of mousse -- I faked the bangs, as my own hair's down to the middle of my back, but they held up amazingly well.

Some better pictures up, now that the con has passed. Not as many as I'd like, but I guess that's what I get for not foisting my camera off onto more people during the shoots.

The plans for the second version of the Book of Doom didn't wind up coming to fruition for Sakuracon '08, but meh, that happens. I did have basket and flower petals, however, and Tige finally got his way and there was flower-petal-tossing Nanao-chan in a tree (photos coming, I swear).

On t'other hand, it looks as if most of my group's done with Bleach now, and since Nanao is far less fun without Shunsui, and the hair is a PAIN IN THE ARSE to do (if I were smart, I'd have gotten a wig?), she's now retired. May reinstate at some point down the road, but if I do, it'll be with upgrades. (Or maybe the kimono version I've got planned. I still want to do that.) 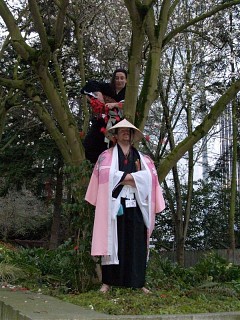 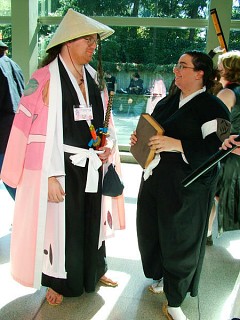 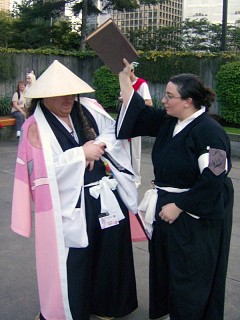 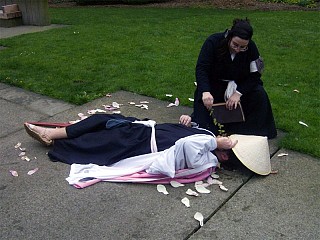