This is one of my favorite characters from this anime. Since the beginning, I suspected that something weird was with him and probably hide the most part of his thoughts. He is handsome, mysterious and cool.

I bought 1 metre of a similar fabric to felt in red, 2 metres black sailcloth, 2 metres red lining, 1/2 metre mesh cloth, 12 metres of cotton ribbon for the hat, 6 metres of mouse tail white cord, 2 metres of black ribbon, 3 and a half tubes of fabric glue. I used red beads to make jewellery and red yarn I had in my house for the hat decoration. Then I took some white fabric I found in my house for the white long socks, a pair of black long socks I cut the fingers part out, and I used my black flipflops. I also used an old chinese yellow hat I found in my house and I covered it with contact paper for furnitures in wood and dark brown colors. I also did the forehead protector with black fabric, cardboard, paper, aluminium silver painting and black nail polish to make the konoha symbol. Finally, I used cardboard, paper, aluminium silver painting and black mouse cord for the necklace.

In 2009 I bought the fabric to make the clothes under the coat (his Konoha clothes from the past) and I made those clothes in 2012. In 2014 I bought a new hat because the old one got broken, put the white cotton ribbon and red beads hanging thing from the old hat in the new one, also used some dark brown wood patterned aironfix I had some left overs of and put it on the tip of the hat. In that same year, I also bought a wig. I used my red contacts from Rachel/Homunculus. 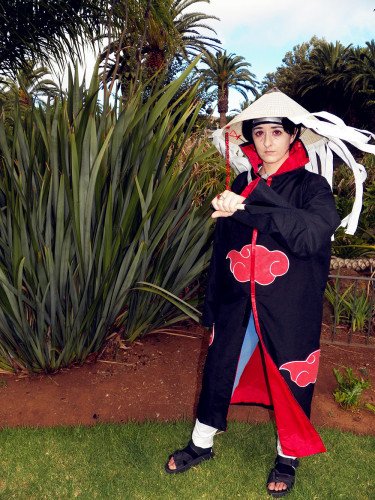 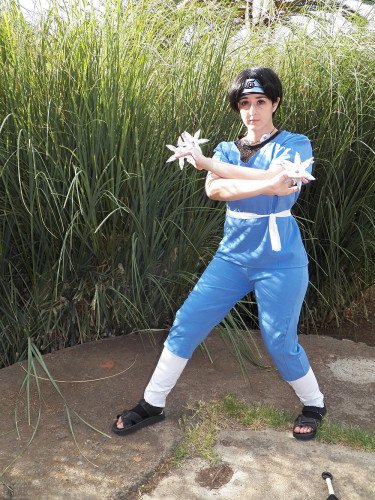 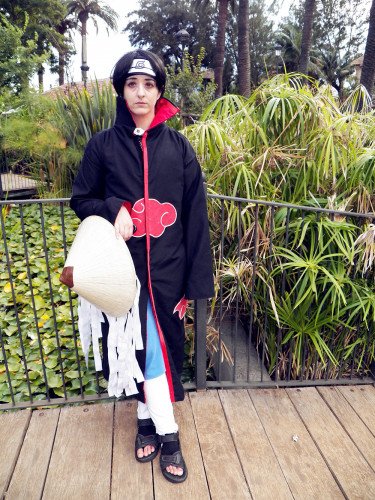 Shikariuchiha You make an excellent itachi!