The idea to make original designs of super hero costumes came to Pan and me while we were fabric shopping in late Febuary. Pan was looking for fabric to make a female Robin costume for AN and while we were looking at all the bright fabrics, it got me thinking about my own love for super heroes growing up. That's when I sort of mentioned off-offhandedly that it would be neat to do dress versions of super heroes and Pan took the idea and ran with it! :D

I take no credit for this costume besides providing moral support and helping to trace out the interfacing for the shoulder straps. The construction was entirely thanks to Pan. She used the basic dress design that she had created for our Star Trek dresses last summer. She used a plain strap for the shoulders and added individual character motifs for both of our outfits. I claimed Batman from the start because growing up I was a big fan of the animated series in the 90s (and Batman Beyond) and I adored the comical Batman movies in the 80s and 90s. Of course, the more recent Batman movies and the game Arkham Asylum have reinvigorated my love for all things Batman. I never could get into the comics, but I did love most other forms of media about the hero. Batman is probably my all-time favourite super hero. I grew up liking bats because of Batman. :3

Pan decided to do a rendition of Superman because she really likes the character Kon. We intended for our costumes to be female versions of the male characters, but with my choice of wig especially, it was easier to consider ourselves as Supergirl and Batgirl.

For a unique aspect of our new dresses that made them different from our Star Trek outfits we decided to have capes. They were attached to our dresses with snaps. I loved my yellow and black cape! Pan's cape looked super cute because she put the Superman symbol on the back. Pan looked fantastic as Supergirl! X3 Pan made the Batman and Superman logos on our dresses using felt and they looked awesome. :D

My favourite part was probably my mask. Pan came up with the original design that sort of had bat wing elements and she used felt and fabric to shape the mask. I finished off the outfit with black nylons and the boots that I used for my Maria costume. I totally forgot how uncomfortable those boots were though. (&gt;.<);; With all the walking we had to do around the Direct Energy Centre my feet were killing me by mid afternoon.

I re-wore my red/orange wig from my Orihime costume because I wanted to wear a long wig that would create a nice contrast to the dark dress. I also kind of liked the fact that it would give the outfit an echo of Barbara Gordon as Batgirl. It would have been too difficult to explain the original design concept for these outfits so we were ok with everyone considering us Supergirl and Batgirl.

Sakura asked to join our group a little bit before the con and she decided to be Catwoman. Pan used the design concept of Catwoman from the Batman Returns movie. She embroidered jagged lines all over her dress and she made arm warmers with embroidered lines as well. Sakura didn't have a cape, but she had a cute mask and cat ears. Sakura looked absolutely adorable in her outfit! :D It was wonderful to Cosplay with Pan and Sakura again and I can't thank Pan enough for this outfit!

We had a blast at Toronto Wizard World Comic Con. It was especially fun to pose around a converted cab that had been made to look like a police car as an ad for Splinter Cell. That certainly made going to the con totally worth it. :D We're looking forward to tweaking these outfits and wearing them again in the future. I can understand the draw to Cosplaying comic book superhero/super villain characters! It's really empowering and fun. (^_^) 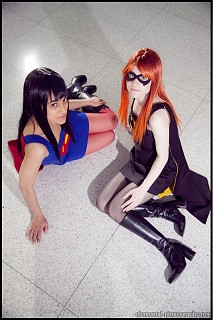 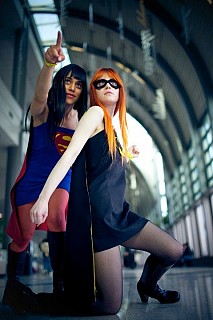 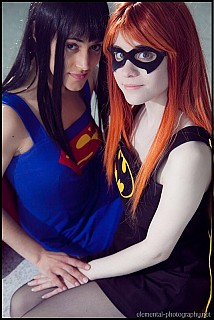 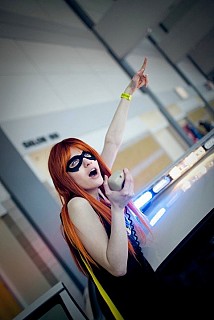 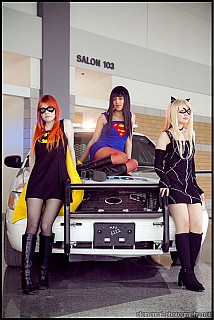 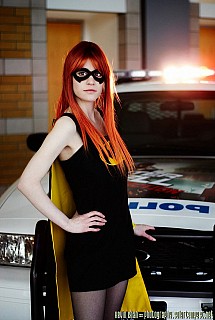 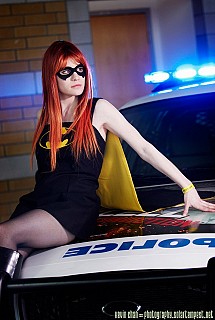 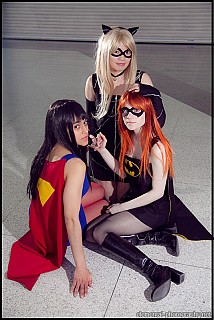