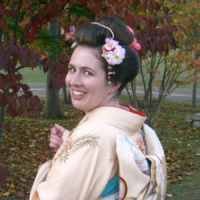 Construction is very slow with this costume. It was supposed to debut for Ad Astra in March 2007, but I'm now hoping it'll be done for Anime North in May, 2007. Scratch that - hoping for sometime in 2008!

Underpinnings:
Corset is now finished. I decided to go that route since I don't want those clear bra straps to show, and I need the support. Also hoping it'll help give me more of the shape she's drawn with. Corset is from a Vogue pattern, plastic boning. Rather easy to construct, I'm just slow. Nude coloring.

Unfortunately the plastic boning doesn't support me very well, as i expected. However, I think it'll work out alright with the costume, since right now I think I might add some boning to that, too.

Also have a petticoat made, but I think it needs more layers. My first petticoat ever, made of tulle. It's not the best, but it'll work.

Skirt
Skirt is mostly completed. Off-white twill, deep pleating, hidden zipper (of which I'm rather proud), and some snap tape. Took about 5 tries to get right since the petticoat kept fluffing out the pleats so they wouldn't show right. Still needs the trim added, but it's hemmed and finished otherwise. One row of trim is pinned, and still has to be sewn on.

Lace
I have some tulle that I wanted to embroider to see if I could get her lace pattern (I have half of it worked out on paper), but I don't think I have time for that right now. I do have some fabric paint to make a trial version, though.

Flower Jacket Thing
Made a mockup, and started on the real thing, but haven't actually really gotten very far. The lining is mostly put together, as is the outer layer, for which I had to add an extra layer since my machine doesn't like sewing stretch (and I don't have a walking foot). It needs the other layers and piping before I can actually sew the lining in and put in the zipper. The fabric was bought from Toronto's fabric district. It's a yellow spandex, but when it's doubled/folded and in a different light it shows a bit orange, which works out well, since that's what her outfit does, too. Patterning the front was a bit of a pain due to my figure; here's hoping it works out.

The drop in the middle of the jacket is made and has been airbrushed orange, but the piping detail hasn't been constructed (well, it has, but I don't like it so I'm redoing it) and thus it can't go together yet. It's several layers of interfacing (sew in) with the non-stretch and stretch layer.

I have the collar cut out and sewn together, and the piping made, but I can't put it together until I get moving on the rest of it.

I have an idea for the petal support, but I can't work on that until the garment is done. Well, I did start and try, but it's not supportive enough, so I have to alter my design a bit. I'm really trying to avoid having to use wire, though, so let's see if I can do that successfully.

Arm-sleeves
Nothing done on these yet, since I want to make sure I can get my garment out of the fabric first. I have some interfacing and that already, but nothing made. The pointy bits are cut out, though.

Shoes
I've got the shoes, which I bought form ElectriqueBoutique for about $20. They've got a 2-4" platform heel, which I quite like and they actually fit well. Very little has been done on the shoes since I want to use leftover fabric from the garment. Have an idea for the side details, but until I try it, I won't know if it works.

Wig
I have the wig, and it's cut and styled, but I need the hair extensions.

I have a pattern for the flowers, but again, must wait until the garment is done. Story of my life! &gt;.< 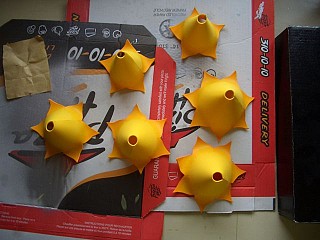 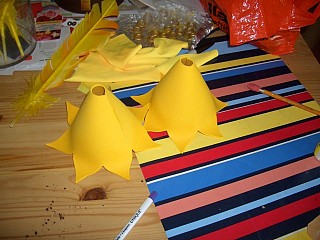 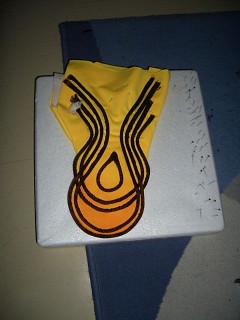 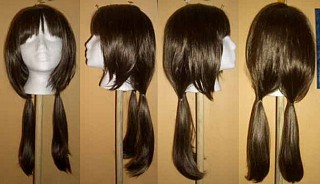 Zaxuku Hey there :D I'm going to begin making a Reith costume soon, and I was just wondering what material you're using for yours? A lot of other people's I've seen, whilst some have been good, have just used cotton or a polyester mix when the material itself is clearly not that, and I can't find any pleather that isn't porno-shiney. I was thinking recently of possibly using curtain material. So yush, and tips on that you could give me? ^^;