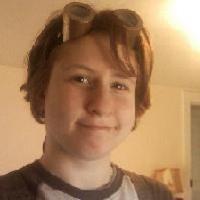 Originally made for a Human Chess Match that my Anime Club did. I was pressed for time, since I was also responsible for my friend's Ryoga cosplay (I made the shirt-- the rest he had to get for himself), so I fudged the pants by running elastic through the hems of my black dress pants.

Shirt-- red and white trigger poplin, yellow bias tape. I made the pattern, which is fairly standard (I used the same one for Ryoga with a few adjustments, and a very similar one for my Finny cosplay). The sleeves are lined so the white shows when they're rolled up (Ranma, like me, is a compulsive sleeve-roller) and the collar is also lined. The buttons were made from bias tape sewn into tubes. I did them with white first, going by the manga, then felt royally stupid while watching some of the series and noticing that they were supposed to be yellow. I was almost done sewing them on too, and I had to rip them off and make new ones.

Pants-- blue trigger poplin. I have the fabric, just need the time and inclination... The pattern is my own, and is noted for producing trousers that are well-nigh unrippable.

Shoes-- black cloth shoes, $4 a pair in Chinatown. Some of the most comfortable shoes I've ever worn.

Wig braided by me. 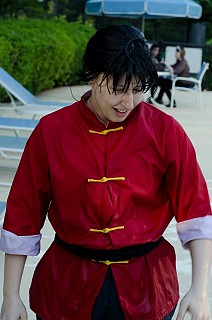 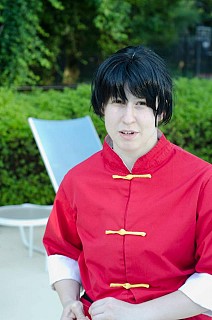