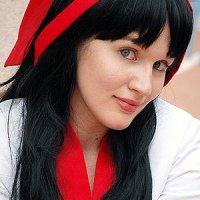 I wanted to cosplay as Monster Hunter, but I couldn't decide which armor to do. I love Kirin design, but I wanted to try something different.

The first thing I made was the BBQ spit. It's such a fun prop to have around the house! It is made out of an odd variety of items: plywood round, wheels, a giant salad bowl, styrofoam, stick-on foamie, model magic, newspaper/papermache, and a spaghetti strainer all assembled and given a generous coating of table-top epoxy. Just so ya know, table top epoxy (a fiberglass coating) is safe on unsealed foam, including styrofoam, craft foam, and closed cell insulation foam. The "flame" is one of those Halloween caldrons ^____^ The meat is made out of a plastic bone, a wooden dowel, polyfil, and vinyl.

The "Lacerator": so...ok, I decided to cosplay Monster Hunter for Megacon's contest with 3 weeks to go, and I had no idea what weapon I wanted or how the heck to put it all together. I fell in love with the Lacerator's design before I had a clue on how to made it. I decided to part from my usual wood-working ways and step into the fantastic world of insulation foam. I used yellow 1" closed cell insulation foam from Shell Lumber (which is probably the best place in the world and where most of my paycheck goes). Foam is...tricky. I really respect those who use it because it is tempermental. I carved out the lacerator from the foam by hand using rasps, basterds (the tool), and sandpaper. The handle is 1" by 1" clear pine that goes through almost the entire length of the sword. Then I coated it with woodglue (a step I didn't have to take) and added the channels. The raised "metal" parts are 1/4" black craft foam. See that cylinder on the handle? Totally a toiletpaper tube. The bolt-looking things are...bolts. The bolts are real and therefore super heavy, each probably weighs a pound. Everything got two layers of table top epoxy, paint, and love. Don't forget the love.

The costume was made in all of two weeks before the convention. Everything is handmade including the hoopskirt (used MangoChutney's tutorial!). It's all black twill, red plaid from Homespuns, and some trim. The hoopskirt is made out of lighter synphony broadcloth and metal boning. Patterns used were the Simplicity 1950's carhop pattern (skirt, hat) and the vested vamps costume pattern (vest, tie), other things were eye-balled XD

This is my absolute FAVORITE costume. I love Monster Hunter and having a huge sword and a portable BBQ while in a big gothic hoopskirt and military hat made me feel like a powerful woman. Don't mess with a huntress. 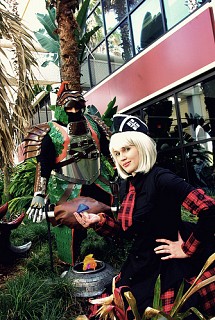 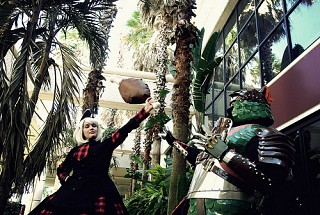 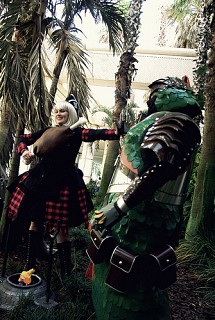 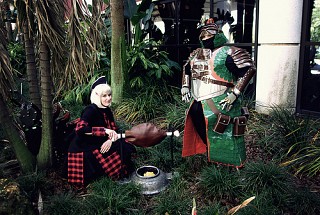 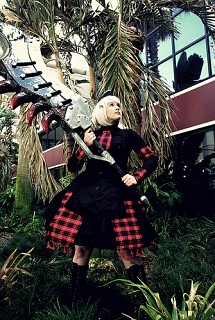 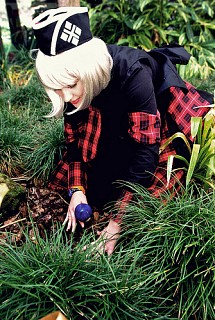 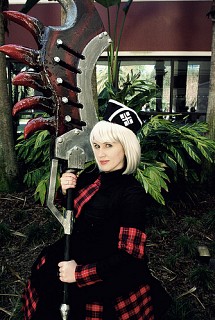 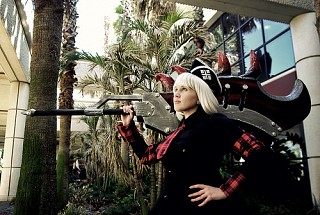 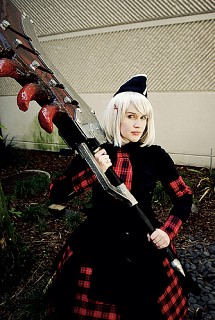 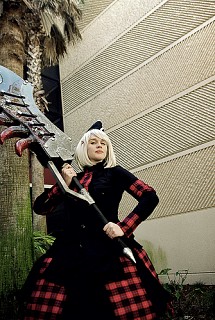 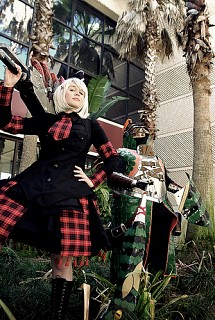 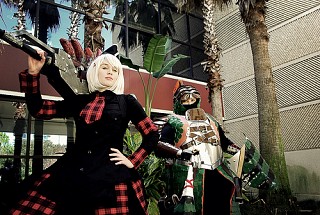 everfeather Gah! That prop... So jealous~