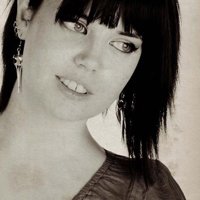 I've always loved Kin Tsuchi- Not many people have attempted to cosplay her really, which I think is a shame as she's a great character, although minor. I had a great response to my costume and she was a lot of fun to be :D

The costume itself was pretty straight forward, yet quite tricky to research as there aren't so many Kin referance images online. I really do reccomend watching the anime again and again in the bits that she's in.

-TROUSERS-
These were pretty straight forward, although finding the right fabric was definitely tricky- In the end I used an urban camoflauge print, medium weight fabric. I've seen the urban camo done before and it really is striking and looks pretty much right for her character. I would also reccomend buying a pattern for the trousers- They look easy but are quite tricky to get right without a pattern. The trousers were full length, with pockets and they had a button-up fly.

-SKIRT-
This was extremely simple. I cut two long rectangles out, hemmed the edges and attached the two pieced together with a button on each side. They had slits up the sides unlike the actual Kin costume, But I think this added to the movement of the costume.

-TOP-
The top was brought for £2.50 from a cheap shop lol. I then added grey fabric rectangles for the shouler pad things Kin has going on XD. The neckerchief was also very simple to do, although if I were to remake it, I'd make it bigger ^-^

-HAIR-
Pretty straight forward. I simply sectioned the top layers of my hair off, put on my sound head band, and wrapped the lose ends of the knot round the head band so to not make a lump at the back of my head XD. I used a simple purply ribbon to tie my hair in a low ponytail. I have hair down to my bum, so I didn't bother making a hair piece XD

-OTHER-
I wore my New Rock boots with this costume, as I think the chunkiness added to Kin's attitude. They looked really good in my opinion! =D The arm braces she wears were made from black opaque tights, along with the black part of the holster. The rest of the holster was made from a bandage. 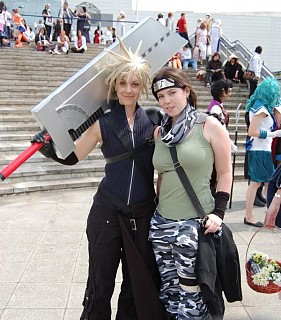 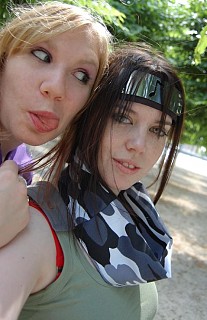 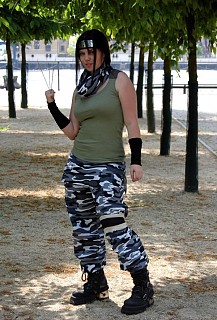