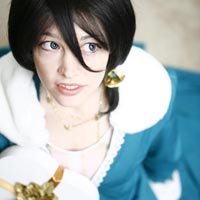 I really the look this outfit had in the manga, so I relied pretty heavily on that as source material. I was making the rest of the costumes from the TV series, however, so I struggled to find a middle ground between the two styles. I feel I was successful in that.
I liked the fabric we got- it was a heavy denim that had a fairly military feel. My only problem is that the stuff tends to wrinkle. I used a pattern for the base of the jacket and then added on pockets and epaulets. I used a lot of padding in the shoulders to give it a military feel. The pants took me an entire day- I made thepants according to a pattern and then didn't like the way they fit, so I played with them until they looked reasonably flattering on me. We found everything we needed for the belt at SAS - the belting was almost perfect and then clasps were a reasonably close match. The overcoat probably took the most time, I spent many hours trying to get it to flare at the bottom.
The tie I made out of a long strip of blue fabric. For the medals on the overcoat, my mother lent me some of my great grandmothers old masonic pins.
I couldn't find any glasses that looked like hers, so I ended up popping the frames out of a pair of Harry Potter glasses and glueing them to pieces I scavanged from a pair of cheap sunglasses. They were very accurate, but they don't stay together well. The wig I bought was a bit curly, so I spend some time with a steamer trying to make it look less girly. I stuck a couple of huge rollers under the bangs to try and get them to do that infamous anime stick-up thing.
I had difficulty finding boots I liked, so I ended up making covers for a pair of shorter boots out of upholstery vinyl.
I originally bought a riding crop at a costume supply, but I forget it when i left for the convention, so some friends went out to the bondage store and bought a new one. 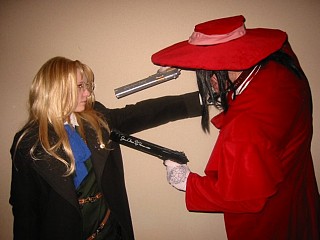 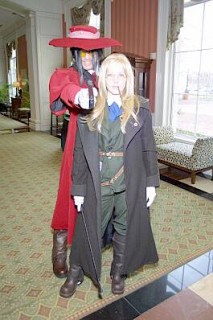