Finally I did this costume, I can't believe it! I have been postponing this costume more than two years waiting for a Pein, but neither Jose nor Shinny had money to make it. I already had the origami kawasaki rose, blue contacts, make-up, piercing, wig and fabrics, so I decided to go without a Pein for the moment.

I love origami, since I was a kid. My sister bought a book of origami for me, and I've been searching for tutorials on the internet to learn more. Konan uses origami as her main skill, attacking enemies with it. She also has a strong, loyal and calming character, but a very sad past. She is kind on the inside though.

These clothes are, in theory, Konan's inner clothes, but she also wear them when she is adult and Jiraiya has left the village, and right before entering Akatsuki. I don't know if she's still wearing them under the coat, but I decided I wouldn't wear the coat because of the hot weather. Maybe next year.

I bought a pair of beige sandals for only 5 € in a store that was on liquidation last year. I had to cover them with the black fabric, wich is the black "texturizado" that was left over my Calintz costume. I replaced the ribbons for black cord to attacht them at the back of my ankles.

The fabrics were bought last year too, except the black bias satin ribbon, which I bought this year. I bought extra black "texturizado" so I could use it for both Konan and Calintz. I also bought 1,5 metres of white "texturizado" for Konan's skirt and the white part of the black kimono, and 1/2 metres of black mesh cloth for the armwarmers.

I needed a paper origami kawasaki rose, because I don't think that buying a rose made with fabric would look good. I found the kawasaki rose tutorial on youtube. If you search for "kawasaki rose" there, you will find various tutorials. I did the rose about two years ago as a decoration in my bedroom and I decided to use it for the costume. I sewed a hairgrip to it and used some adhesive tape to reinforce it and it wouldn't fall.

I did the armwarmers with the mesh cloth and the black bias ribbon, and the bag with an imitation of felt I had for the inner structure. I then covered it with the fabric that was left over the Gaara's poncho and brown cord I had. I supposed the bag was soft brown like most of the bags of Naruto characters, because there isn't a color drawing of this outfit.

The kimono shirt was easy, I just cut two parts for the front side, one for the back side and two for the sleeves, with a rectangle form and some "V" cut at the two front sides. I cut the white fabric for the white parts of the "V" neck and the sleeves, and I sewn everything together.

The skirt was very fun and easy to make. I cut 6 pieces of the white fabric and I sewn them two by two, except the ends of each piece. The black bias ribbon was sewn in the middle of the three pieces that I had then, and later I sewn the three pieces together by superimposing them. I used an elastic that was left over Jose's costumes to attatch the skirt. I sewn all the ends of the white strips with more black bias ribbon, and then I sewn both ends in the front part, trying to gather the fabric like in Konan's skirt. My mother helped me with the ribbons so I could finish the costume in time. 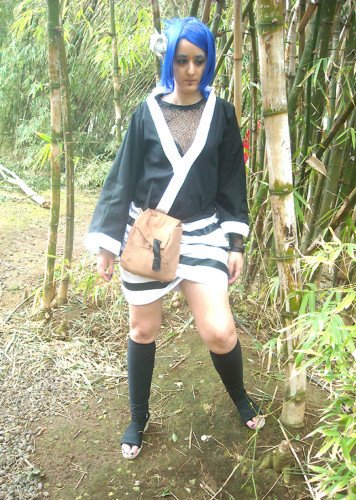 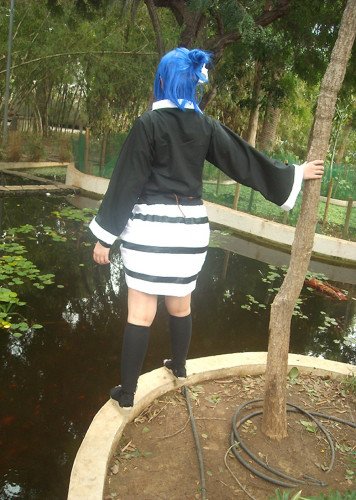 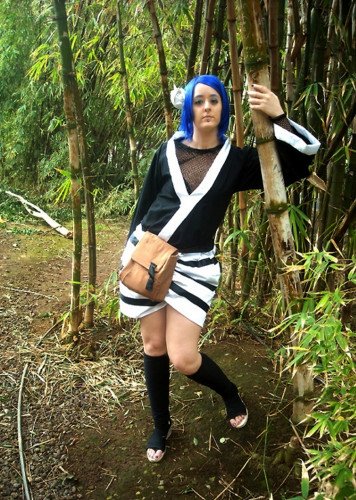 Dave-Mit-Hut Nice cosplay, but she' not wearing them as an adult, she wears them as a kid ^^ Under her coat she's wearing something else ^^