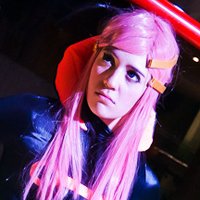 I can proudly say this was the most difficult costume I've done so far, and probably the most fun to make! :D It took about two months to finish, with me being mostly lazy until the week before the con as usual. XD

I got the wig off of ebay (and can't remember the seller otl). The yellow contacts are from **BANNED URL** to match Savvy's that she had from her Grell costume. The makeup is from Mehron's paradise line, in the color 'Storm Cloud'. It took us about three hours to apply at the con, which wasn't much fun. Next time we'll probably get body suits. XD And instead of painting our legs we got some gray tights from Target.

The stitched makeup was last-minute, because originally I actually had stretchy black strings (which allowed me to talk, slightly) glued with spirit gum and latex to my mouth. But at the con they wouldn't stay on, so I ended up just ripping them off and drawing the black lines on instead.

The pants are made of a shiny pleather that we got during JoAnn's Halloween sale and we had to alter a regular pattern. They lace up the front and down the back, and between the two of us we probably bought close to forty boxes of eyelets. XD That part was the most fun. During Fall Break back in the beginning of October, we sat and pounded those suckers in and watched movies all day and ate icecream. Lol, good times! XD
After those were all pounded in, I went to Michaels and bought elastic cord (aka ponytail string) and we laced them up.

I went to Goodwill and bought some flat boots (since I'm normally about four inches taller than my Debitto, sooo we had to fix that XD) and made covers for them at like three in the morning the night before the con with some random vinyl I had in my closet. Dear god. XD I quickly added the fur, although we forgot to put fur on Savvy's boots too in our rush to go to sleep. Ugh. x_x

My vest was kind of a lucky make! I was going to use cotton quilted fabric like I did for my Mello vest, but while I was at Hancocks one day, they had this fleece that if you turned it inside out, it was pleather, and quilted! I was like "O_O" and bought A BUNCH. XD Best fabric ever, it was so comfy too~ So I made the vest, no pattern because it's really similar to my Mello one besides the furry hood.

Now, my arm things! Those were the most fun. I bought white opera gloves from Halloweenexpress and cut off the fingers and trimmed them to elbow-length. Then I found some batting in my mom's old quilting stuff, and wrapped it around and around the gloves, sewing it on as I went, until I felt they were poofy enough. Then I took some cheap white fabric and ripped it into strips, and wrapped those on top of the batting and sewed/glued them on. :D They were all fringy and poofy, it was so cool. XD (Now they're stained by my gray makeup, but that's okay, it adds to the creepy factor I guess haha.)

The headpiece was made from three shower curtain rings, two yards of red ribbon, a random black plastic thing my dad found, annnnnd a jingly cat toy on a spring. XDDDD
I love that thing, at the con I was very entertained by the jinglebell on the yellow poof. XD
The rings were originally white plastic so I spraypainted them with metallic silver, then sewed the red ribbon to each ring so that it would fit my head. Then my dad found that black piece thing which had a hole in the top the same size as the cat toy's spring! He glued it in for me and put a little cushion underneath so it wouldn't hurt my head. :3 baww. Then I bent the spring and wrapped black electrical tape around it, wa-la!

So there's some things that will be improved on by the next wear, but overall, I'm super proud of myself for this one!!! :D :D :D 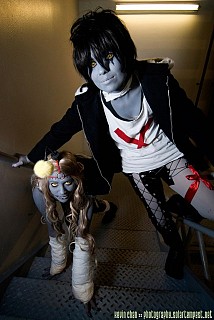 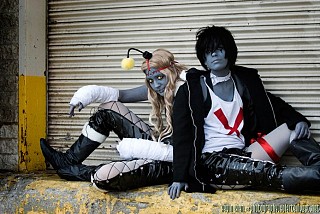 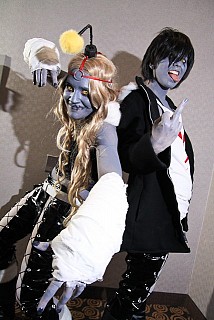 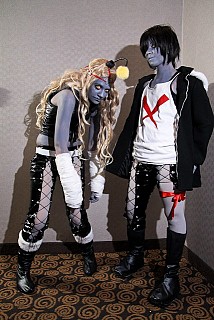 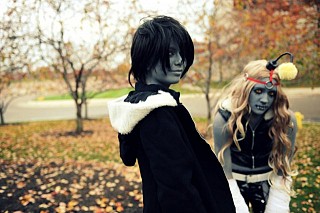 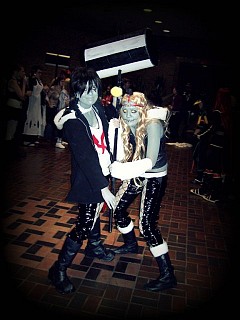 DetentionMisfit Haha! I love these guys! XD You did an awesome job on this costume! It looks... well, awesome! ;P (I bet the makeup was killer, too. It looks pretty much perfect!)