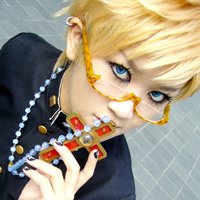 I was introduced to this series (again) in a form of cosplay proposal. LOL! Straight out I was asked if I would like to do Shima Ango so I decided to read up.

The series has tons of hot bodies and bloodied violence, but in a rather stylish way. I don't read alot of manga so I can't tell you if this series is a must-pick up but it seems all really unique to me.

Shima is visually interesting because he has this short blonde hair with really really kira eyes! @[email protected] And I finally get to strike off another item off my list; to cosplay a favourite character who has a gun! XD;

- Costume
The costume was a very simple piece and the crosses were acrylic cut outs and sprayed with chrome finishings. Chrome spray makes it really shiny unlike normal silver spray -&gt; Thanks Lenneth darling!

The pants were a pain to wear because he has such a tiny little hip so my pants were made very low if I bend down I would moon! XD

- Weapon
The gun was.... modified from a transformer style Walter P-38 ._. But my country was very very strict when it comes to importing toy guns, gun replicas and everything. It was PAIN in the ass.

The wig made me look like naruto when I first put it on. It was hilarious! I spent close to 3hours styling it to the similar wispy locks that Shima has ._. But the immense satisfaction was there when I saw mock shots of the wig looking ok~

The main structure was also saw off on the top and sand with.... nail filer! LOL! to a fine finish.

I am most proud of the necklace with his personalised cross:
The main body parts is cut out from acrylic and sprayed paint for finishing in colour and texture. Every acrylic is cut to exact measurements all done with anticipation that every piece will assemble well to form the cross D:

The middle of the cross carries a pour-on lacquer cured into a hard semi-sphere. It is embedded onto a mirror piece that has a printed &#33836; on it. The semi-sphere gave a magnifying effect to the word which came as a pleasant surprise =D

- Make Up
The nails took me the longest and is the most painful to do. As I have a corporate day job, I could only do the nail in the evening prior to the event. As Shima has black nails with detailed crosses on all his nails, I had to strike off the idea of doing very details cross, and tried: stencil/self-painting/masking tape cut outs.

All failed when I coated with gloss, the adhesive from the masking tape miniature cross cut outs melted and made the motif skit off position, and messed up the black nail polish below as well. stenciling also didnt work because the motif was too small.

My partner's white vinyl sticker did the trick, it was very adhesive and has shiny glossy surface. It cut well and stuck well on my nails and does not react to gloss paint. Finally when I was done, it was 5am in the morning prior to the event @ 12noon. * gasp *

Make up was fun to do, had practise with Tsukimori Len cosplay so this was a better follow up. I used dramatic fake eye lashes on both top and BOTTOM of my eye lids.

It was quite fun to look this different XD! 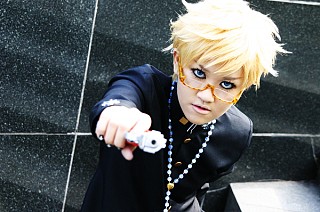 Aera You look like you cam straight out of the manga! Great work <3

SugarLove I just LOOOOOOOOVE your face *_____*

Bitter Apple Your best cosplay! This is gorgeous! <3

mariya WOW I love how much effort you put in to even the details <33 You even wrote about it~~ Hehe I could never be bothered to explain myself xD It really paid off (: You look awesome <3333