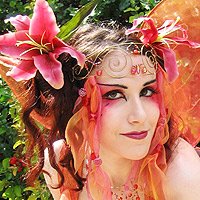 I've wanted to dress up as my primary character from City of Heroes ever since I designed her in Beta, but I missed last year's Halloween contest so I made her for this year.

What the character looks like in-game: http://sarcasm-hime.net/frostfaerie-ref2.jpg
The main problem with this costume is that it's drawn to look like armour, but it's essentially just a skin painted on to the character shape that stretches and conforms to the body, so it would be impossible to make as actual armor. So I sort of improvised.

The bodysuit is based on the Kwik-sew pattern, modified to have only a back seam. I made a main bodysuit out of white spandex and then used leftover pieces of spandex to make the overlay pieces to create 3-D definition for the 'armor' pieces. This involved a lot of putting on, pinning, taking off, sewing, putting on, more pinning, ad nauseam. Then all the edges were accented with shading using Prismacolor markers. I wish I could have airbrushed the shading, but I don't have a compressor and I was short on time, so I went with the markers.

The knotwork patterns were a pain in the butt; by the last one I was so sick of knotwork I wanted to kill something. :P The 'rivets' are metal thingies I found at Arton Beads, which have little prongs on the back to attach to the fabric. They were perfect; I just spraypainted them white and outlined them in marker.

The elbows and knees are a textured waffle-weave black spandex to match the texture in the game; it doesn't really show up well in photos unfortunately. The boots are bought, and the arm wraps are strips of stretchy wet-look spandex.

The wig was kind of a pain, as I bought purple dye to try to tint it but it ended up being too dark, so then I tried rinsing most of the dye out. It's a bit streaky but okay. The horns are insulation foam and cardboard, held together with duct tape and covered with papier-maché and textured modeling paste, painted with purple and interference blue acrylics and sewn to the wig.

The cape, added for Dragon*Con 2006, is two layers of organza, cut with a heat-sealer and sewn together.

The costume was much more popular than I had expected, which was gratifying. I plan on making the glowing ice sword at some point to complete the ensemble. ^_^ 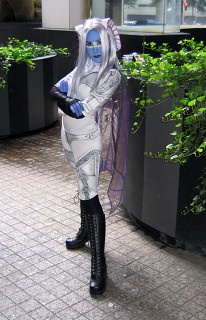 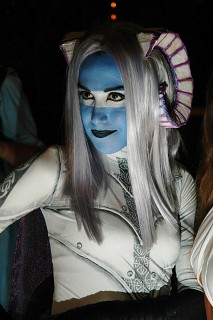 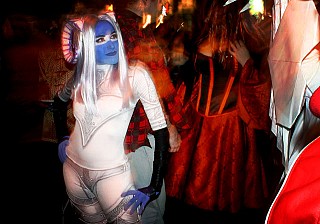 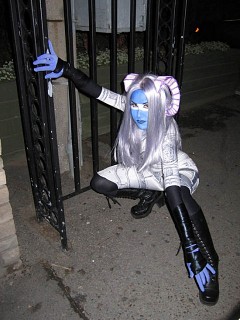 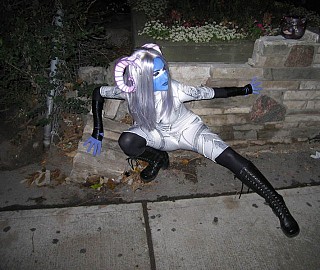 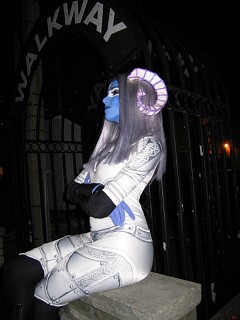 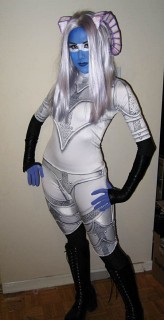 ianakagir Awesome job. Nice to see some fellow CoHers getting their cosplay on.

Sarcasm-hime There's a zipper in the back, of course. :)

lissiekun How did you get it on without a zipper? O_O

carladawn Yay for City of Heroes!!

MidnightEyes Yay for a CoH costume!! XD I love it!!!