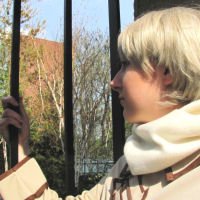 JEEZUS CHRIST I HATE YOU PLEATHER.

The costume has finally been completed, and I'm thrilled with how it came out. <3 No matter how annoying working with pleather for the first time was, the costume was a lot of fun, and I had a great time wearing it.

Some explanations don't hurt if anyone's curious, right? I mean, this was pretty much my first costume that was COMPLETELY hand-made (and yes, I had plenty of help from my awesome friend <3), so it would be great if I could be of a bit of use to anyone else. xD

Wig: I'm pretty sure I did this the hard way, but it doesn't hurt to explain how I did it for future reference, right?

So I got the wig, all pretty out of the box (Cosplaywig's Grass Green wig), and tied two ponytails at the bottom that would eventually be the pigtails on top. Once they're nice and secure, lop them off. <3 (they had about 4 small rubber bands on each one)
Then I actually took clear nail polish and dipped the bottom of the pigtails in where I cut them off, so when it dried, all of the hair was cemented together.
I made two rings out of Crayola Model Magic and painted them gold, and later I super glued the pigtails into them. At some point throughout all of this you can cut the wig to the length you want it to be lol
Here comes the annoying part that I probably could have done a lot easier but just didn't know how to. xD

I actually used Velcro to attach the pigtails to the wig, but then once they were attached like that and positioned how I wanted them to be, I sewed them both down into the wig in a few unnoticeable places so they were nice and secure.

And done. <3 If anyone else is planning to do something with a wig involving something like this, I hope that was at least a little helpful. XD;

..the rest of the costume: Red pleather bought at Jo-Anns, as well as some muted black cotton for the skirt and stripes, and some stretchy black for the stockings. The stripes were all stuffed with pipe cleaners. Yes, pipe cleaners. XD That made them round while also making them bendable. That's how the hip pieces had some shape to them.

Use a tad of Model Magic and some craft foam for the other pieces of the costume, and boom, we're done. Hope those little tidbits were helpful for some people! <3 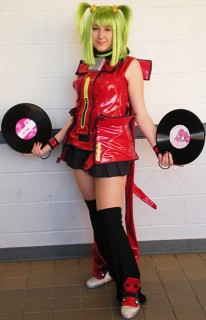 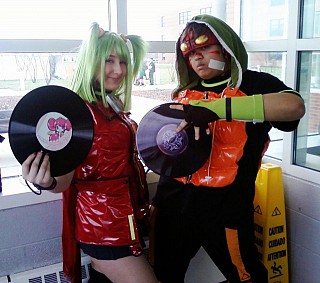 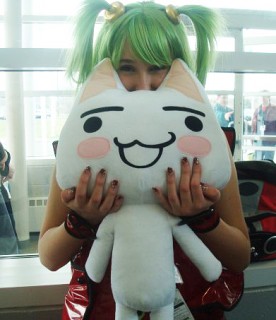 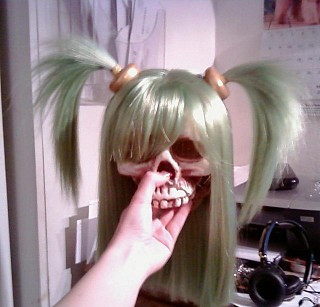