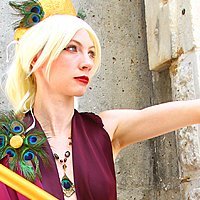 I've been obsessed with Greek mythology all my life, I've studied it in school, and dealt with it on numerous trips to Greece. I've always loved the originality of the costumes at D*C and really wanted to do some sort of original design, and so I thought "Why not do something to show off my love of Greek mythology?" and decided to try to organize a little group of original-design Greek gods.

...well, the idea took, and the group grew and grew and we had dozens of members and even more people interested in the group. We're doing it again for sure next year, and are even considering some sort of programming and a partnership with a nearby college Classics department. I'm very excited about how the group turned out, and I am extremely proud of my costume in particular.

Let me preface this by saying that I really was not a very good seamstress before this costume. Most of my stuff was commissioned, or I had LOTS of help making it. But I am very happy to say that I sewed this costume entirely on my own, with only a bit of assistance drafting the pattern and a little guidance by my mother who is my go-to sewing partner, and my father who came up with the idea of how to do the staff.

Parts of the costume:

Dress - originally based off an image of Bryce Dallas Howard, but it mostly was an image in my mind...I can't draw at all, so it was seriously contained in my mind the entire time. The dress is a halter, with an empire-waist and v-cut top that pleats a bit to create a draping effect. The skirt is also pleating a tad at the waist-line to create a feeling of natural draping. The dress took most of the time to make, because I ran into a bit of trouble in the back and had to improvise a bit.
I chose a dark, regal (eggplant) purple to reflect Hera's status as Queen of the Gods, and also her arrogance. I didn't dare choose a lighter, more innocent color. I also wanted the form of the dress to cover but show skin at the same time...Hera is sensual and the goddess of marriage and fertility, but at the same time she doesn't give it away easily, if you know what I mean ;)

Himation - a himation is an ancient Greek draped cloak. It's quite a simple garment, but can be worn a number of ways, and looks very flattering. I chose a bright mulberry color for the himation to offset the darkness of the main dress. Those helping me with the costume initially doubted the color choice, but I insisted and the two colors looked fantastic together.

Accessories - I knew that Hera needed lots of accessories, as she is royalty. Of course, there is the diadem/crown. I used Paperclay to mold it, and I have to admit that it isn't the best, as it was my first time using the material and I was not used to the way it dried and shrunk...so its a bit lopsided, and it also doesn't fit very well, so it's a good thing I put some holes in for ribbons to tie it down. I etched some patterning onto it, just some random conglomerations of various Greek designs, and painted it a darker gold color. I added a few peacock feathers...

Speaking of the peacock feathers, I had so much fun with them! I bought a bag of 100 real feathers and they're absolutely beautiful. The colors reflect light so wonderfully. I used them to make a nice-sized feather fan (I have to remake the handle, which sort of fell apart a bit during the con), and a brooch for the himation (which I also used a bit of Paperclay for).

The staff is my favorite accessory. The top foot or so screws off for easier, safer transport. I molded the petals and other shapes individually out of Paperclay, attached the petals to the wood with epoxy, and hot glued the other pieces together and onto the top of the staff. It held together amazingly well, and did not break even when dropped to the ground. Epoxy is pretty much my favorite thing ever, now :)

Shoes are authentic Greek leather sandals bought in Athens, and I already had the necklace and bracelet.

Hair and makeup - despite the Greeks common dark haircolors, I felt that a gold or light blonde would be better to portray the ethereal nature of Hera, and also to stand out against the dark colors of the dress. As for makeup, I dithered around quite a bit before settling on a dark lipcolor (Revlon in Black Cherry, with some rose-colored Avon lipliner and Wet and Wild brown-ish lip gloss) and light eyeshadow. The eyeshadow is a mix of Clinique's "Strawberry and Fudge" palette and L'Oreal's Eyestudio Gold color, which I swished out the sides a bit. I used foundation in a slightly darker color than my natural tone and some raspberry-colored blush, just a tiny swish. 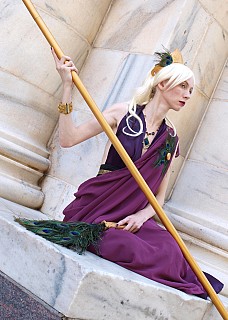 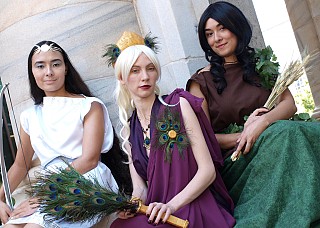 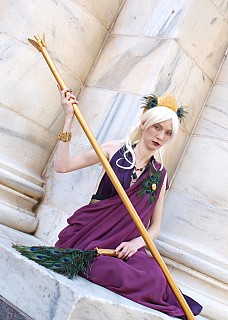 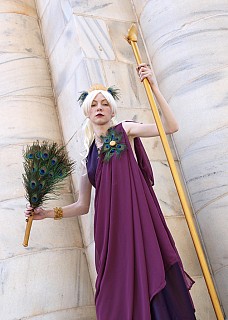 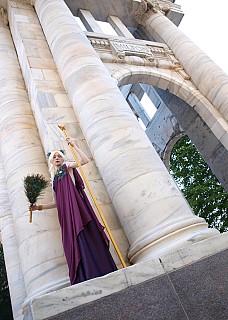 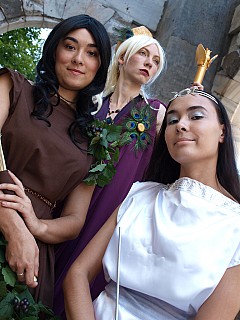 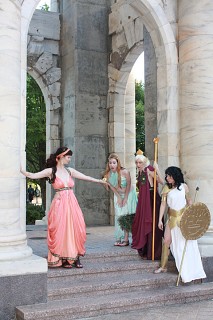 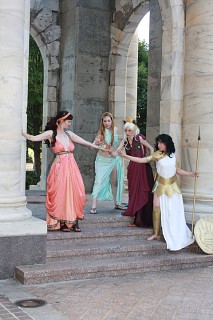 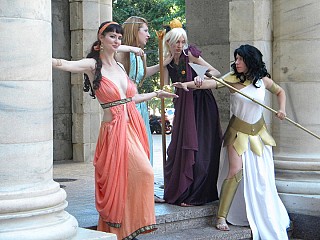 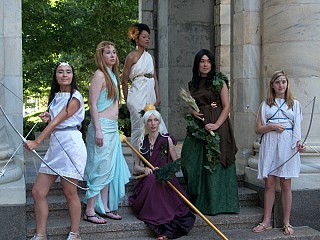