I was feeling insane and ambitious, and Leila has always been a dream costume of mine but I have always been so apprehensive about making it. I felt I was just about ready to make it, even though it's way out of my comfort zone since I'm dealing with materials and garments that I am not used to constructing at all. I figured this would be a (stressful) learning experience for me.

I cast the six bracelets myself out of Clear Cast resin, dyed to the correct colors (red, yellow, and blue). The wrist bracers were made out of pleather (bottom half) and leather hide (top half) - leather was edgekoated, painted and stamped around the edges to create a raised look. The leather was also wet-formed into shape, which also hardens it. Pleather was top-stitched, and because it's much softer than leather acted as a cushion for the sensitive skin on the underside of the arm.

I made the black bodysuit for underneath the main costume out of 2-way stretch Wet-Look Spandex. It was sewn entirely with my serger and created to be as seamless as possible, only using one piece for the main bodysuit, plus another piece for the collar.

The red leggings were made out of 2-way stretch pleather - the fabric had minimal stretch so I had to be very careful with how I fitted them. I had to do some pattern manipulation to make lee-way for the piping as well as shape the top as they are high on the sides and low rise in the front and back. The center front features piping that I custom-made myself using the same pleather fabric and some cording. The knee pads are handmade, hand-sewn and handquilted (there is batting between the two layers) to achieve the 'raised' look.

The corset/vest portion was patterned separately but accounts for one garment. Both had to be custom patterned and fitted on me as a draft before I actually cut out the pieces of pleather to use for the actual costume, since I had to implement the exact seams and have it fitted tight like in the art. Also, I had to be make sure the two pieces aligned correctly because there is a keyhole in the back, and if it was off a bit it would be an obvious mistake - thankfully, I was able to get it just right. I used the same red pleather I used for the leggings. The corset portion is fully lined, with steel boning inserted into boning channels I sewed into the lining for support. I inserted D rings for the straps that go across the front to snap onto, and the center front has a separating jacket zipper sewn into it to close it up just like it does in the anime. I also replicated the topstitching get the same look. The straps are made of leather and the snaps are industrial strength, so I don't have to worry about them popping off under stress. I brought a lot of realism into the costume as a whole, and I wanted it to be durable enough to handle stress. The upper vest portion is also lined, with another of the same type of separating zipper in the center front. I used black pleather for the 'vent' detailing on it and zig-zag stitched around it. I made the collar as it is in the anime, as well - it is very high-ended in the back.

The jacket is made of red pleather and is fully lined in white soft twill, the lining of the collar portion is also quilted to get the right effect for the character. The jacket is designed like a shrug garment on the character, so it doesn't have a zipper. It was pretty tricky to pattern out because you will never see any real commercial patterns for how hers is, it's very unconventional and a bit pointless in design and obviously a fashion piece. But I suppose you can say the same for the rest of the costume, as well. I had to mess around with the pattern a lot, especially the front panels and collar portion, until I was happy with it. I did a lot of neat top-stiching for the jacket detail. Patterning aside, I thought it would be one of the harder things to make, but it probably ended up being the easiest aside from the bodysuit underneath everything. The longer 'sleeves' were custom-patterned, top stitched, and serged together. They were another piece that took thought to figure out, but once I got around to actually making them they were pretty easy.

The wig was purchased as is with only minimal styling and trimming needed to get the end result.

The belt and holster are both made out of leather hide and involved a lot of patterning to match the art, since it's not your typical belt. It is one main belt and another belt within, and it was very difficult figuring out the smaller belt that goes around and appears to have a front and a back side to it - if for whatever reason I was not convinced that the character design is extremely atypical before, this was the nail in the coffin. The leather is edgekoted in back and painted with Angelus paints.

The boots are highly modified, they started out as white thigh-highs I had lying around for a costume I don't intend on making anytime soon, and were butchered and sacrificed to be something completely different. The raised detailing on the top of the boots I did with pleather, which was topstitched to create the divided effect and embroidered around the edges because I hate raw edges, even when it is pleather and it's being used as a decorative piece. Call me crazy.

Shoulder pauldrons were made by modifying children's roleplay helmets - they are supported by a layer of foam so they appear to be floating. I really love these pieces, and they were implemented a day before leaving for the con, thanks to Chris for the quick thinking on that one because we were going to go with leather hide, which would have looked considerably less attractive. 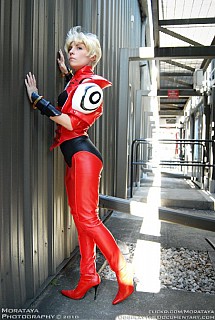 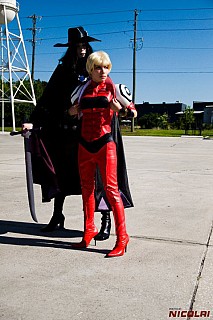 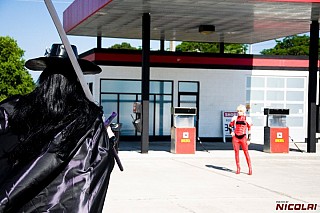 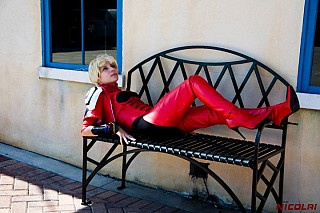 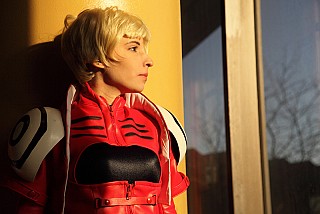 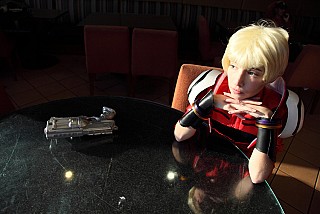 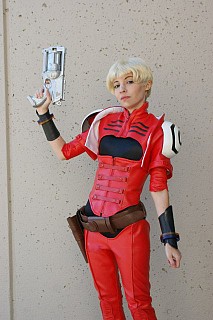 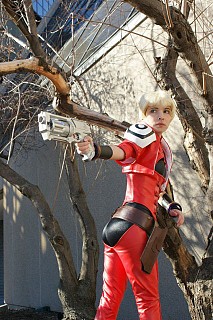 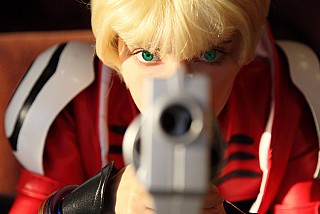 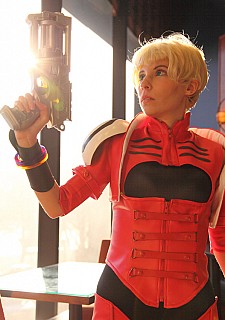 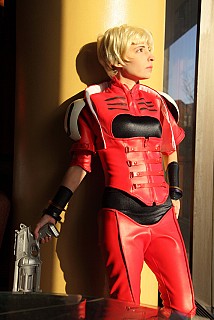 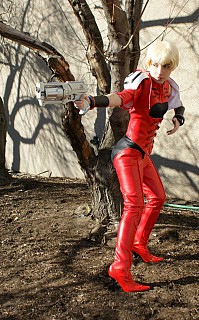 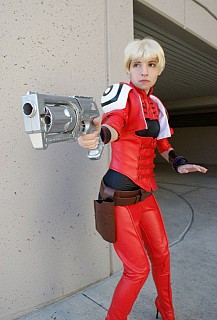 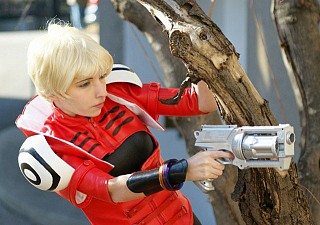 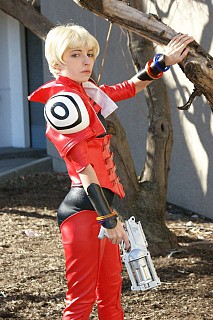 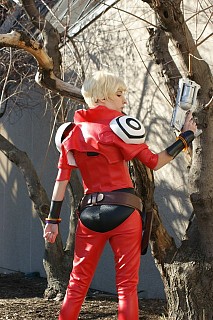 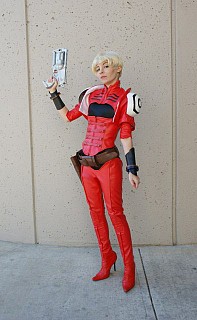