The bulk of this costume was made in 2 weeks of nonstop sewing and whittling. I sewed everything from scratch, and the spear was made entirely with hand tools. (Except the white leather pouch, that was bought at Disneyland. I had no pockets in this costume, so I needed something to hold my money and hotel key.)

The drawstring pants were a project for a Basic Sewing class. Though it isn't really seen, the sleeveless shirt has a faced slit in the front, with small buttonholes, and laced with gold cord that matches the vambrace trim. All seam allowances are finished and hems are fully rolled.

The cowl and butt-flap are both lined. The butt-flap is sewn as part of the sash. The decorative edging on the sash and headband were sewn on by hand.

The vambraces are made of 3 layers of material. The outermost layer is real suede leather; the innermost layer is a thick, black fuzzy fabric to cushion my arm; and sandwiched in the middle for stiffness is cardboard from a Cheerios box. I machine sewed the cardboard and black fuzzy material together with a wide/long zigzag stitch, and then handsewed it to the leather. The leather surface was then painted red and varnished. I then handsewed the gold cording all around the edge, and THEN handsewed the white fuzz onto the wrist edge. (Needless to say, my hands hurt like a BITCH by the time the vambraces were finished.) I slit the cord holes with a pocket knife and then laced the gold cord into the vambraces backwards so there'd be a design on the back of the arm.

The wooden spearhead was whittled by hand, filed, sanded, etc, and then attached to the wooden shaft by a length of PVC pipe. Both the spearhead and the shaft extend into the interior of the pipe for stability. The ends of the PVC pipe were then covered with decor made from Model Magic. The paint job was really rushed on it, unfortunately, so I hid the worst of it beneath a magenta sash I quickly made and tied around the shaft.

I also had a piece of jewelry worn with the costume, in the style of the ring/bracelet/bracer equips. It's an original design that I forged and soldered myself out of sterling silver and yellow brass, with fantasy runes acid-etched into the surface. (I realized after the fact that it doesn't particularly look like anything you see in the ring menus though, so the cosplay Nazi in me groans a little. Oh well.)

The sashes, bandana, buttflap, and vambraces were patterned by me from scratch. The shirt was based on a pirate shirt pattern and heavily altered. The cowl was based on a Monty Python-esque knight costume pattern's hood, which I altered to hell and back through a series of mock-ups until I got the right shape/look and then put a turtleneck on it.

The pants were based on a commercial pattern, and after some minor fitting I widened the legs a bit and added pockets to the sides. There's elastic at the waist and the ankles.

The basic shirt pattern was drafted with PatternMaker software, and I then added length and some styling. The shirt has a facing around the full neckhole and the front slit.

I stripped the spear of its previous paint, did some more sanding, and cut down one of the Model Magic "rings" to match the reference graphics a little better. It was then re-painted and re-varnished.

I also did a lot of clean-up work on the wig. The back and sides were feathered to look more natural and less chopped, and I did some "poofing" and shaping to the top bulk with hairspray and pomade. I also had to re-tie the headband in place, but this time I got the twist right. 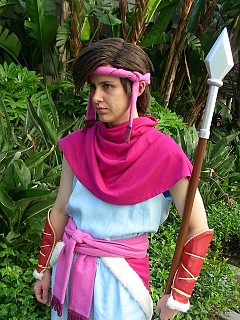 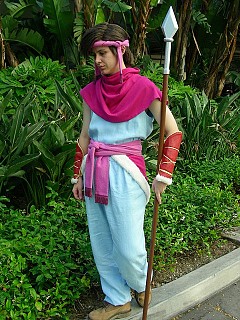 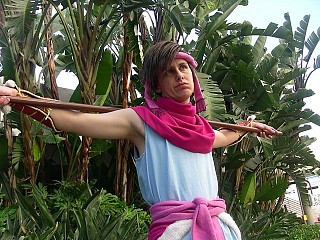 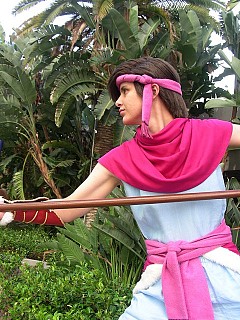 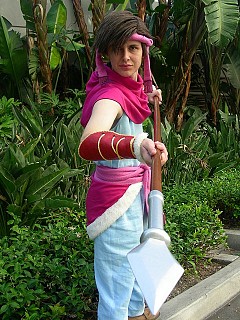 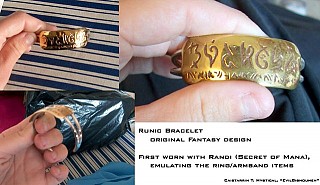 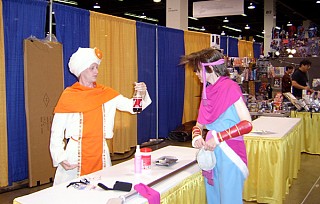 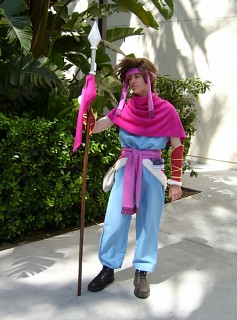 **Scion** I love that you made this costume! Secret of Mana is hands down one of my favourite games, and you never see any one cosplay from it! Great job, your costume looks amazing