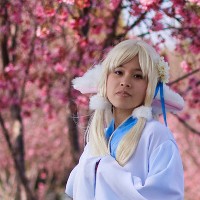 Version 1.0 - Version 2.0 will be more detailed and (hopefully) more accurate.

Current Progress: 100% complete
So far I have spent about 5 days working on this project. Some days were about 10 hours worth of work. I have a few things left to do with the skirt and top, then the belt, and finally the armor. The armor shouldn't be TOO hard to do.

As of April 23, 2006 I have finished the knee armor, most of the sewing for the skirt and light brown top, most of the armor top, one side of the arm armor, and the belt attachment. I have also made templates for the shoulder armor.

The entire costume was finished just in time for AX 2006. a few days before AX I put the finishing touches on the angel band. Yes I know it's backwards, but i thought it looked rather nice.

The entire silver parts of the costume are actually made out of some kind of heavy cloth with a silver laminate. It gave it a really nice shiny effect, however, that stuff cracks/wrinkles and sheds like crazy. It's not really noticeable, but if you get close enough, it looks like i have glitter on the rest of my costume.

(Sept. 18, 2006) Since I'm probably going to use this costume again in the future, I'm going to remake the armor and make new gauntlets like in the actual artwork. I will be using foam and styrene instead this time. And possibly even some fiberglass. 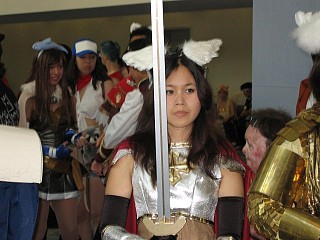 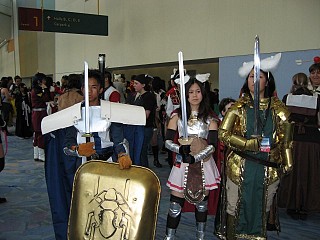 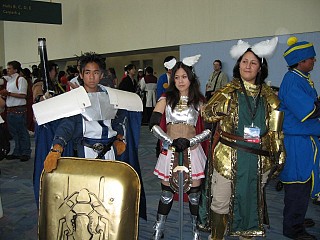 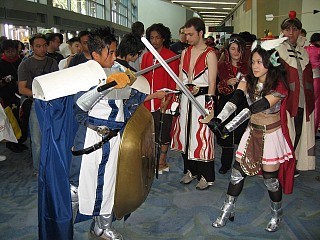 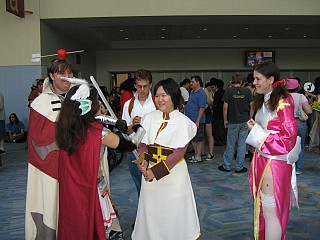 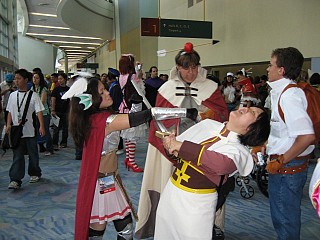