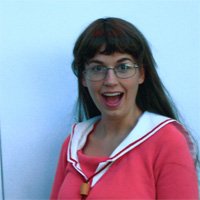 I consider this my first (completed) cosplay where I started to really get into as far as detail and accuracy is concerned.

I've actually never seen One Piece, although I did read a lot of the manga to gain some familiarity with the series. The reason for doing Nami was because the Open House theme for the year was "Oceans of Discovery." So we decided to do a One Piece theme. We made our booth look like the Going Merry. XD

I decided on Nami's thief version for multiple reasons. The first was because I thought I'd be going to a midnight showing of Pirates: At World's End (that didn't end up happening), and that costume could easily pass in such a crowd. The second was because Open House IS a family affair, and Nami's thief costume is one of her *considerably* more modest.

I'm pleased with the final result, especially the top. I decided to make the sleeves markedly floofy to go with the pirate thing, although they aren't QUITE drawn that way (there definitely loose and flowy though). It came out quite cute. I made the pants, my first adventure with that. Fitting them was a huge pain in the rear (sometimes literally).

My wig is the Pat style in N9 from Cosworx. I *love* the color for it. I didn't want Nami to have traffic cone orange hair, but I still wanted it to be orange.