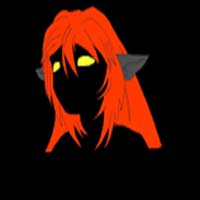 
In Chrono Trigger, I really liked Frog to the point I promised to myself I'll really cosplay him...When my bestfriend told me there's a sequel for the game, I really get a copy from him. And when I saw Harle for ze first time, I swear to the world (and even to anozer worldz) zat I will cosplay Harle!!!!!!!
Harle iz my most favorite character in Chrono Cross. She was a long-time promise to cosplay for myself. I like her coztume and make-up. I love ze way she moves, ze way she battles, and especially, ze way she enters and exits ze scenes. I like the mysteriouz character of Harle, and her story. At first she was an antagonist but later changed to help the protagonist. She'z a unique character in the game. And the techs she makes during battles, they're all awesome! What also inspired me of cosplaying Harle is "ze moon". I really like the moon ever since. I'm a moon-gazer. So, I think Harle is so perfect for me. She's sooooooo great!

My favorite aspect on this cosplay are ze sewing portions, I did it by myself, hand-made, no sewing machine. I like sewing the whole costume, from horns to toes. And when you see the 4-yard cloth gradually becoming a costume, you'll really feel great.
But the most exciting part is when I actually wear them at the event for ze first time! It was very cute! I wear the costume I personally made! And when I came out of the CR, all eyes followed me. Some stopped walking and said: "Wow, tignan mo, oh!" Others keep on looking back at me even when they're in front of me and we were on the escalator. There were parents who tell their kids: "look, a clown". There were kids who cried, and also, there were kids who were happy to see a clown. And ofcourse, the ever popular and most commonly used greeting a cosplayer must encounter once he/she enters the cosplay life, and the sacred chant a cosplayer must hear that would confirm he/she is really a cosplayer..."excuse me, pwede po magpa-picture?"
It was so fun and challenging for me to immitate Harle the whole event. The way she walks, and the way she stands, up to the way she strikes a pose!
I also enjoyed when fellow Cosplayers come to greet me and appreciate my costume. There were other people who took pictures of me and asked for hug. There's one who kissed me on my mask's cheek for she really like my costume. Thanks to everyone.
My most unforgettable and favorite task on this cosplay is when somebody ask me to stand on the LUNA Online background and everybody took pictures of me. I saw flashes from various SLR's and digicams. I was overwhelmed because it was my first time to experience that...then I calmed down and strike a pose! ^,^
The most fulfilling cosplay I ever experience, I was the costume maker, and the cosplayer as well.

The Horn, at first is so difficult to create. I don't know at first what materials will I use.......Until I saw the pillows here. Hihihi...
The Dress, is a life-extinguishing task. At first I don't know how will I sew the accessories and designs on the leotard knowing it is expandable, and I also have to make sure my body will fit on it.......Oh, there are pillows on the other bedroom...hihihi...
The Transparent Pants, it took me the whole evening to completely make it. It was difficult to make a jogging pants, with that delicate cloth. It was my first time to make a jogging pants, and it was cool.
The Gloves, it made me realize zat there's a rule in sewing a glove, and not just pattern it from your hand and sew it.
The Shoes, it was moi first time to make shoes, and it was fun. The feather lace irritated my nose for quite a time,...achooo!
The Earrings, at first I thought was impossible to have but I was wrong...if you really want to have something or do something, there are so many ways, just believe on yourself!
The Bells, they challenged my creativity during the event because they always detach from my horns. Then my bestfriend Pepsiman and I thought of a better solution.
The Costume, as you can see is very very challenging because the pants is transparent. But I just think that I am Harle, so I didn't mind it anymore.
The Boys, are so challenging for me, cause I know there are some who will really dare take advantage on me that time. But I came prepared for them...If I feel malicious touch from them, I'll use my tech LUNAIRETIC...it's for ALL ENEMIES Damage. hihihi... 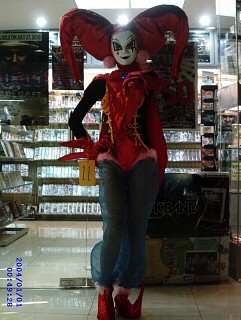 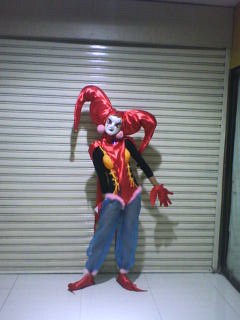 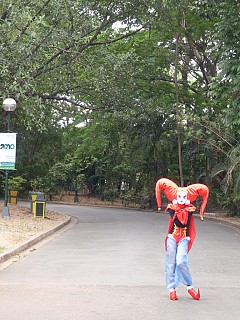 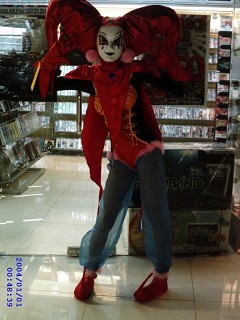