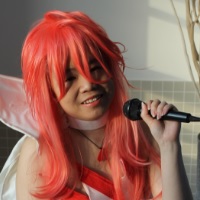 For a Tsubasa skit organised by CrystalNeko which turned out to be a walk on parade with x-xTsuki-Yuki (Syaoran), CrystalNeko (Dream dress Sakura), Winter's Dream (Clow Sakura), Crimson Wings (Fai) and Lady Bahamut (Watanuki)

To be honest, Chii is a character which I would not consider cosplaying. She's cute and CLAMP designed so many pretty outfits for the character, but she is someone who I don't like enough to cosplay as her. However CrystalNeko's Tsubasa group has got me into cosplaying as Chii, whlist Sakura was avaliable when I choosing my character, I was willing to be Chii if someone else wanted to be Sakura as I have already got several Sakura's planned/Completed.

I had loads of spare white duchees satin enough to make Chii's costume. I am not entirely sure if the spare fabric came from my Ashe, Garnet, Sakura's white dress or all of them. I suppose I hate having too much spare fabric lying around and since the fabric will work well for Chii, I thought why not use it up? On top, I also had some white fake fur fabric which I recall was brought for Misa Amane's jacket from Death Note, however I doubt I will ever cosplay as Misa again besides, I'm not so much into Death Note as I was back in 2006, so another excuse to get rid of some spare fabric. The blue jewels and white bead chain was brought from a Chinese market an Hobbycraft respectively.I'm not too happy with the bead chain because it's so difficult to see in photos. Finally the wig was brought from Ebay for £20.99 inculding postage. A big thanks to my friend for helping me find and buy the wig.

The hardest part of the costume was making the top of the dress, which leads to how uncomfortable this was to wear! I was paranoid about the top sliding down. I swear, I kept on looking down every 2-5 minutes to check if the top was okay? Also, I decided to wear my Clow country Sakura shoes with this costume as I did not want to walk on my bear foot all day. The Expo/Con floors are always very dirty & sometimes you'll find bits of broken glass or sharp objects in certain areas and there was no way I want to risk hurting my feet.

Overall the costume recieved some good reception. Although many people thought I was Chobits Chii, the people who recongised me as the Tsubasa Chii was happy because they never seen a Tsubasa Chii in the UK before. I have seen 2 Tsubasa Chii's in the UK, but neverthless I'm glad I have made someone happy. 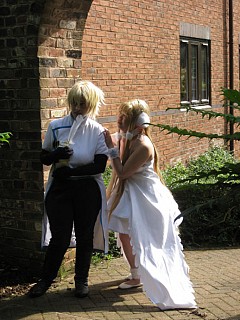 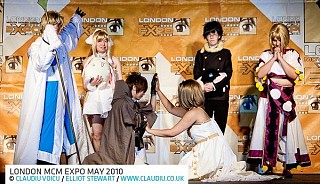 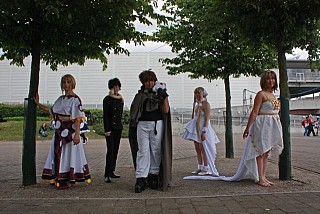 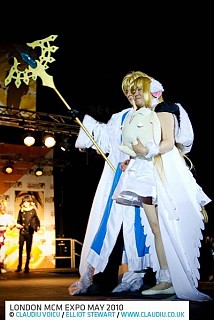