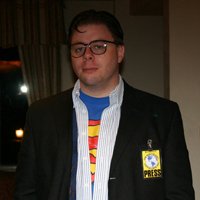 I created this costume back in 1993 for Halloween and have worn it several times over the years. It stemmed from the fact that as a Halloween nut, one of the costumes I always wanted to try was a woman. But being that every Halloween party you attend, there's always that one guy dressed as a woman, it had kind of become cliche. So I decided that if I was going to dress as a woman, I was going to dress as a specific woman. Being a huge Superman fan, I decided to dress as his cousin, Supergirl. Originally, my goal was to purchase and wear a commercial store bought Supergirl costume for ease. Unfortunately for me, back in 1993, the only sizes available were women's medium. Not something that would fit me. So with the help of my mother, we created the costume you see here. The \S/ symbol was created by me. The wig, shirt, cape and pleated skirt were store bought. The belt was a woman's elastic belt altered by my mother, and the boots were a pair of cowboy boots that we hot glued faux felt to. I mentioned the pleated skirt being store bought, because the nice studio photograph was taken back in 2005 for a newspaper photoshoot and that was the original skirt that was used with the costume. The other pictures in the group were taken at the 2009 Superman Celebration in Metropolis, IL. At that point, the pleated skirt no longer fit me and my mom made the shorter, non pleated skirt you see there with fabric we got at Jo Ann's fabric.
To play to the fact that I was a manly looking Supergirl while in Metropolis, I carried a chunk of red Kryptonite rock with me. I told people that I had been infected by the rock, and that because of this it spiked my testosterone levels. This caused very manly facial features and a deep voice. I told people that within 24 hours I would be back to my normal Supergirl self. 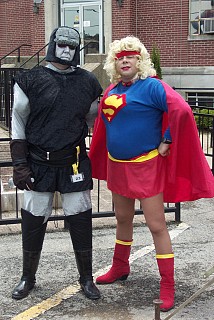 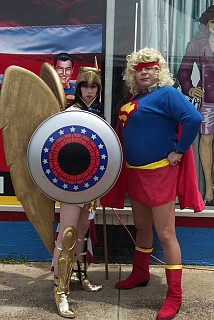 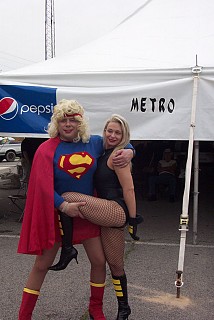 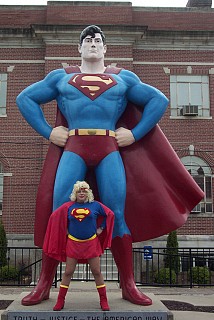 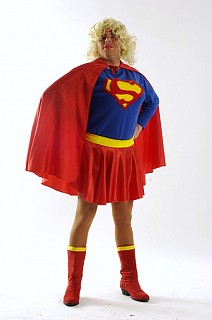