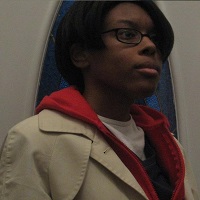 Because I cannot sew, I did not have enough time to sew a costume, and there would be a billion Soras at the anime convention anyway, I decided that I must do something original and cool. I thought about all the worlds Sora travels to in the game and how he sometimes changes his appearance to fit that world. And then I realized that he never changed his appearance during the Peter Pan stage (or the Pirates of the Caribbean stage in KH2) and I thought, "OMG! I'll do Pirate Sora!" And after shopping around and making the wig, Pirate Sora was complete.

1. One Black Vest: My mom let me cut up one of her old vests.

2. Black/White striped shirt: I brought this from a Value City or something. It's a cool shirt, but don't like the black sleeves.

3. Red pants: I found these pants at a Value City-like store. I love them! They are very similar in color and texture to the pants Sora wears in the first game, but different. They look like pants a pirate might wear.

4. Yellow Converses: I actually wanted to wear boots first, but I was having trouble finding yellow boots. But then, I realized that Kairi wears Converses in KH2. I was like, "OMG! I'll wear Converses, too!" And thus, I am wearing Converses that are the same color as Sora's shoes. Perfect for doing chores on a pirate ship (Of course, pirates don't wear Converses, but whatever. ^_^) I got the shoes off of Ebay.

5. The Wig (Yes, I realize that this should be number 1 on my list): I brought this wig from Cosworx. It was the Punky wig in 6 -- Brown, if you wanna know. I brought some hair scissors, combs, a styrofoam head, pins, and Suave Basics Maximum Hold Hair Spray (Level 10), and got to work. The wig actually didn't require a lot of cutting or styling. This was especially awesome because it was my first wig. After styling the main spikes, I had trouble cutting the back of the wig and trying to make that hair even.

6. The Necklace: I brought this from an Ebay store. It's smaller than the one Sora wears, but it looks the same.

7. The earring: I wore a gold, loop earring in one ear because...Sora's a pirate and pirates must wear earrings. :P

8. One Blue Belt: I found this belt in my mom's closet. It's very similar to the belt Sora wears in the game. 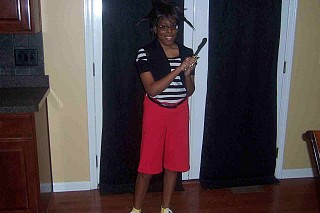 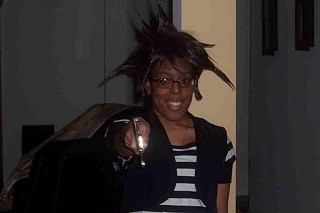 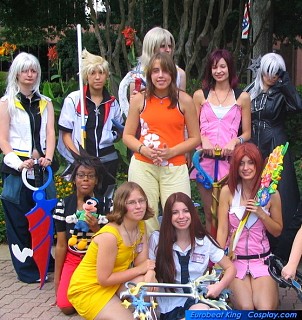 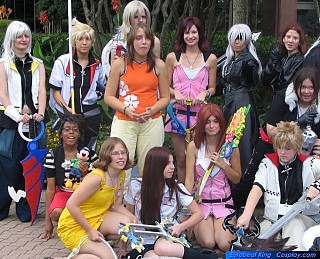