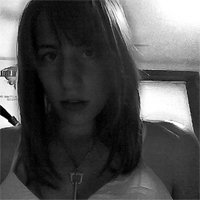 I saw one of the first trailers for Final Fantasy XIII, and immediately fell in love with the main character. I decided, however, not to begin work on her until more information was released, so I didn’t actually get started on the creation of the costume until (much) later. By that time, more trailers had come out showing Lightning’s personality–she was fearless, badass, and beautiful, and I just knew I had to cosplay her.

I began work on the costume in November of 2009. I didn’t officially finish the costume until July 2010, because I was in the midst of my freshman year at college and thus, without a sewing machine for long periods of time. I would work on the costume whenever I went home on breaks, and then almost non-stop when summer finally came.

This costume was an experience. It was frustrating, and extremely rewarding at the same time. There were multiple occurrences when I was sure I wouldn’t be able to finish the costume…but I did, and I’m very happy with it! While making this costume, I had a lot of firsts. Wearing a wig, sewing zippers (all five of which had to be handsewn since I apparently can’t get the hang of a zipper foot), working with paperclay (the pauldron, vest clasps, and circular decorations on the vest), working with vinyl (the leg bag and top belt), making gloves, working with craft foam (my first of three attempts on the pauldron and the bullet holders on the gloves) and making boot covers.

Blood, sweat and tears were all (probably literally) put into this costume, and I couldn’t be prouder of it. Due to scheduling conflicts I wasn’t able to enter the costume competition at AI 2010, but I will someday! And of course, I was still able to have a lot of fun in the costume. I wore this costume with some new friends, making it my first group cosplay, and it was something I really enjoyed. 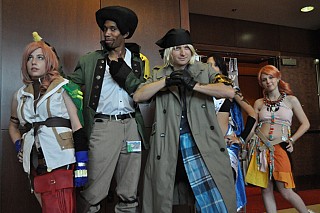 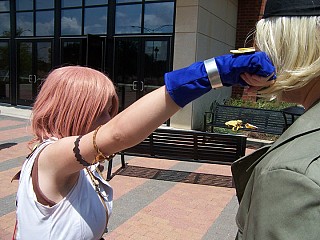 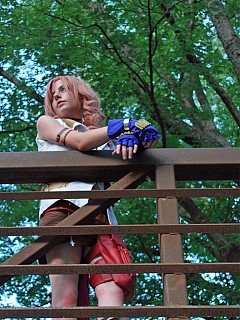 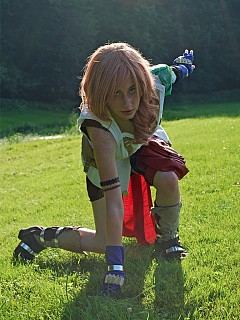 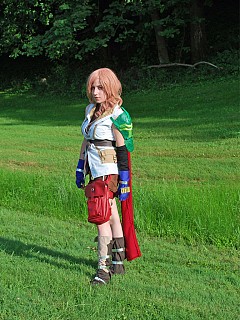