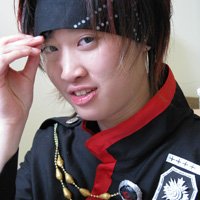 Cosplayed as Lavi for our anime club's D.Gray-Man group. We decided to do the third costume because it had only just came out in the Manga so it was the freshest. And Lavi is jus plain awesome~

Jacket: Mainly done by my Mother as I'm still learning how to sew :p It took us quite a while to figure out a pattern for it. And I intentionally made it larger than my size as Lavi's jacket is quite loose on him. I love the sleeves <3

Pants, boots and gloves: Stuff that I already had. But the pants still need to be modified so it closer resembles Lavi's pants.

Headband: Made from the leftover material of the jacket. Is held by a piece of velcro at the back. The dots are merely liquid white-out lolz

Chain with badge: Made from a regular plastic chain and the beads and round badge are molded out of paper-mache and painted over. They proved to be really hard to keep on my costume as for some reason we couldnt hot glue a safety pin onto the back of the round badge. So we ended up using cloth tape and sticking the safety pin onto it. But even with cloth tape the round badge still fell quite often. I had to be really careful when I was running lol. Will probably eventually remake the chain and the round badge, to something less chunky. But will wear this one until it is beyond repair, coz Tyki made it for me ^^

Exorcist badge - Made from black craft foam and silver paint. We modified a pattern we found for the badge and traced it onto the craft foam and cut it out. Each layer was glued on with PVA and then painted over. The symbols were drawn on (by Allen) with a thin as hell Copic. They were then directly sewn onto the jacket.

Hammer: A collaboration by Tyki and I. The internal structure is made from a cardboard shipping tube and thick circles of blue foam. A hole is drilled through the tube and the stick inserted though it. Black polyproplene is then wrapped around to give the hammer it's shiny surface. The handle and the pointy cone (styrofoam) at the top is wrapped with black tape, and the red lines on the hammer is made from strips of red cloth tape. I heart my hammer <3~ was definitely the highlight of my cosplay. 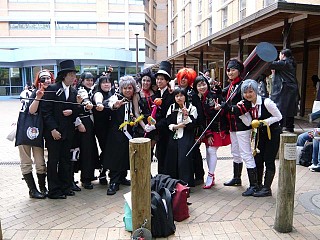 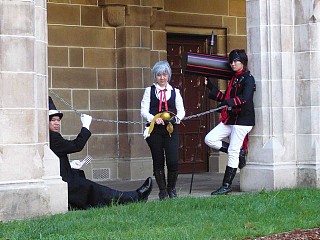 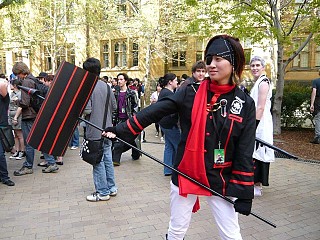 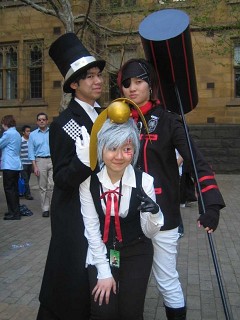 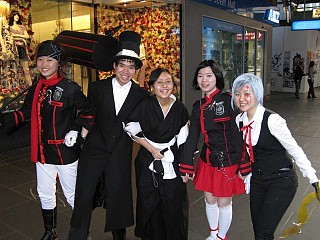 mystaya171 Something to think of for the round badge. If you remake it go to a craft store and look for the pin backs. Then you could sculpt the badge onto it and have a home-made pin-badge. That's what I did for the exorcist badge on my Cloud Nine costume (except the badge was made out of sculpy and I used 2 pin backs since it was so big and I knew it would be heavy).