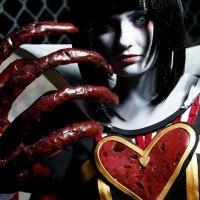 Man oh man, I'm so happy with myself that I was able to complete this costume! Alice: Madness Returns was introduced to me by a friend some time back and I was instantly INTO it. Horror takes on Alice in Wonderland was never really my thing, but the characters and storyline of A:MR just had this incredible atmosphere and I was in love. It was almost instantaneous the day my twin Hopie and I discussed if we wanted to cosplay from it, and while she was looking at photos of Alice's outfits to choose from, I was busy trying to decide between the Queen of Hearts and the Mad Hatter. And in the end, the Queen won out (only because I'm a sort of jittery person, and I worry I'd have more trouble with stilts then they were worth-- hopefully I'll still be able to cosplay him one day, though)!

SO I BEGAN ON THIS COSTUME!

The pattern I purchased ended up being entirely too different than what I wanted, so I only used it for the bodice and scrapped the rest to pattern out the gown myself. I purchased a hoopskirt online, editied it by taking out one hoop and making more of a bell shape, then made my first giant petticoat and went from there! The black fabric I used was a stretche ponte, and it was really nice and easy to sew!

I painted all of the gold details by printing out enlarged photos of the Queen, cutting them out on Freezer Paper and using that as a stencil to iron on and airbrush with Jacquard paints! I then carefully drew the gold design around the outer dress, and used painter's tape for all of the marking on the gold lines (and white lines on the blue stripe skirt).

The red skirt layer was originally my red fabric, which I painted black hearts on with stencils and then covered in a lace type of netting to get the look of the reference fabric. I attached the netting with spray on adhesive, which I now swear by for this sort of thing! A strip of horsehair braid was added to the bottom to even out the gathering from the top, and there you go!

I need to remake my bodice and collar, so I can't really say much on those.

The crown was craft foam (I bought the small super thick pieces!) that I heated over the oven and set in curved positions. The heart on top is a bit of model magic!

The claws were pvc pipe, wire, fabric, craft foam, foil, and then model magic on top. I really need to paint them a little lighter red, but I'm very happy with them. Hopefully one day I can make a movable pair based on a tutorial for steampunk hands I found on DeviantArt! 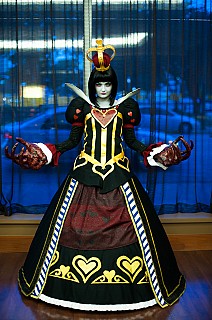 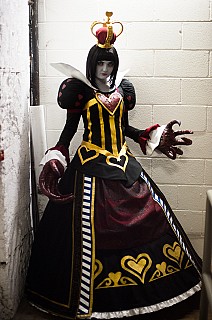 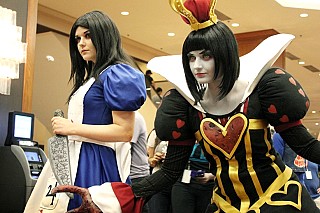 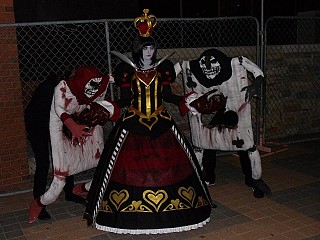 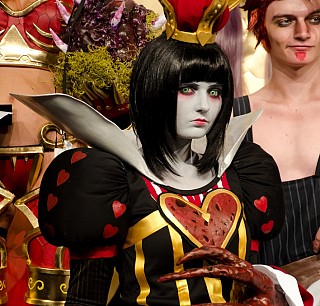 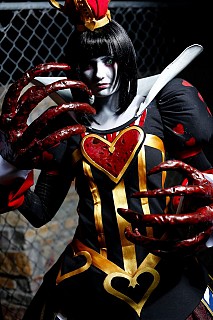 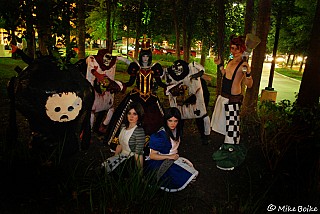 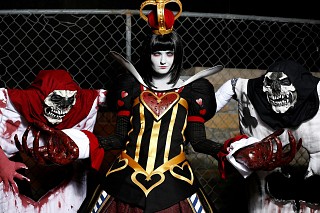 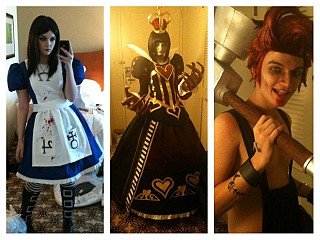 delicatemorning What a great job!! I am blown away by your costume

Catzilerella You did such an amazing job. I LOVE it!

~H~ You are SOOOOO AMAZING!!!!! Congrats on the well-deserved award.

WARPAINTandUnicorns I didn't realize it was you in the photo. O_o

CosmosFox Whoa a dream cosplay I've been itchin to do! You've done a magnificent job on QoH! How much fabric was used and what type?

silent_dreaming Wow, looks awesome! Congrats on the win, too, it was well deserved!

Shappi I totally adore your costume as well asl whole group's work on the skit. It was amazing, great job!

natsuo This is one of the most amazing costumes I have ever seen!