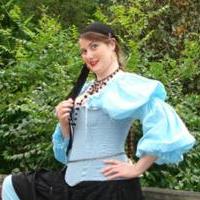 The coat is all cut out and partly sewn together. It got derailed for a bit because I had to buy replacement lining, but after I move I should be able to pick back up with it.

I wanted to do Soldier because I still love Team Fortress 2, and Soldier is absolutely bonkers but also hilarious. He also doesn't get much love from costumers/cosplayers for some reason. I rarely see people portray him, and when they do of course they're RED team rather than BLU. I'm debating how much I want to deviate from the standard loadout in terms of prop weapons, but a rocket launcher is definitely a necessity. I even have a bugle, for that matter.