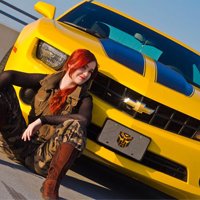 This is one of my more well-made costumes. I actually bothered to make it nice instead of winging it, and it's truly a testament to how much my sewing skills have improved over the years.

The bodice and skirt are nothing special, really. However, I have remade the skirt (now making it two skirts with the outer one hand-painted), and made new sleeves (one ripped when I last wore it =/)

The wig is what makes the costume.

Version 1, long braid: It is a combination of a long wig and 8 packs of extensions in the same color. Two straight packs went into the wig itself, being sewn into the actual weave of the wig. I braided the wig and then added two more straight extension packs to the end of the braid. Then I braided that section. I took another two packs of extensions, one short and one long, and created small braids to wind in with the main braid. Then I took two curly extension packs and made them the bottom unbraided section. After that was all bobby-pinned, I sewed in flowers and ribbon to hold the whole thing together.


Version 2, braid with loose ends: I realized after 3 wears that the wig got very fuzzy and the braid started coming loose. I decided to pull the whole thing apart and remake it. I took out the two curly extensions completely and bought 4 more packs of straight extensions and a ponytail clip. I moved 3 of the extension packs that made the length of the braid up into the wig itself, which helped me make one massive short braid on the top. I made two faux-french braids and had them feed into the large braid, then added an extra braided extension for effect. I braided the massive amount of hair and tied it off at the end. Then I put a ponytail clip on the front to hide the transition between braid and straight hair. After that, I sewed nude netting into the back of the braid and ponytail clip and used it as a base to sew 3 straight extension packs below the ponytail to give the wig more length. I tried giving it some wave but it wouldn't take. I plan to try more techniques to see if they will take some curl to make the bottom look more consistent.


The wig weighs about 25-30lbs. I put a panel of heavy interfacing into the right shoulder of my bodice to help support when I pin the wig to the top. In both styles, it is very heavy and uncomfortable...but I do enjoy being Punzie ^___^ 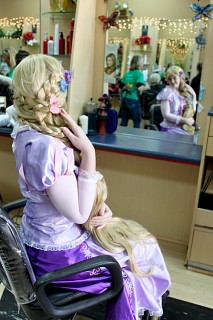 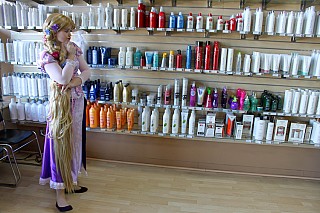 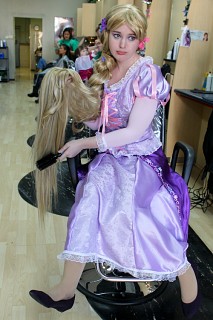 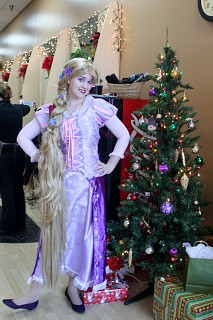 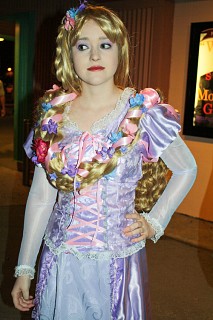 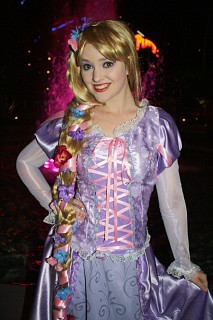 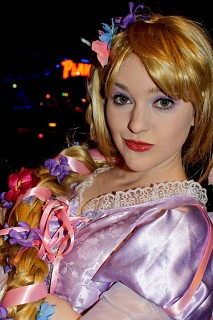 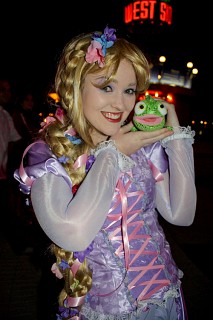 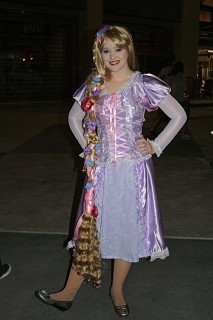 Mohmoh you make a phantastic Rapunzel

EchosOfTheDead Best Rapunzel I've seen yet! You look amazing, and the wig really reminds me of the one used on the character in Disney World! Perfect! ^^

Elendriel One of the best Rapunzels I've seen, hands down! You really do her justice. If we ever end up at the same convention, I'd definitely love to get photos with you! ( -- > does Flynn) :)

InuCosplay Cosplay gorgeous! I would like to know where you bought the wig is the same! congratulations indeed!

CalamityJade you're beautiful, this cosplay is perfect for you! *__* well done, and I love your wig *_*

WonderlandAlice Great look! Which/where is the wig you used for a base? I really like your color combination for the fabrics and florals!