L's one of my favorite characters of anime, if not my absolute favorite. He's not only smart, but has a kind heart and a great sense of justice. He puts his life in the line in order to capture Kira and stop the wave of criminal deaths in Japan. Some people will disagree and say that he's a coward because, at the beginning, he remains out of everyone's eyes, but I think a lot of people are just unable to follow this genius character's trail of thought. Everything he did was for the good and safety of the society as a whole, always trying to find Kira even if it costed him his own life or had doubts about the intentions of his own policemen comrades. He's also pretty funny, troll, childish and weird and I love those traits of his character.

I think this is the first cosplay I didn't make from scratch. I have seen so many fail L cosplays, mainly because people usually wear bad or no wig, do bad make-up and wear women clothes instead of men.

The fabrics used for his white sweater and jeans aren't sold in the fabric stores where I live and I never found them online either. So I have spent years searching for a similar sweater and a pair of similar jeans for men and I finally found them between 2013-2014. I had to fix the trousers because I have wide hips, and men's trousers have straight, narrow hips. So I did two cuts in the fabric in both sides of the hips and added some old jeans fabric pieces to enlarge the hips and be able to wear the jeans. I also adjusted the jeans in the back and I added more pieces of jeans fabric between both legs.

For the make-up, I learned while I was studying that it is better to use a mix between two tones of brown and purple to do realistic under eyebags. I wanted to look like L, not a racoon or Gaara. So I used this method for this character's make-up.

I finally cut and styled the wig according to L's hair. I used gelatine leaves, as always, and hairspray. The Death Note was a gift I obtained in a cosplay contest I won in 2011. 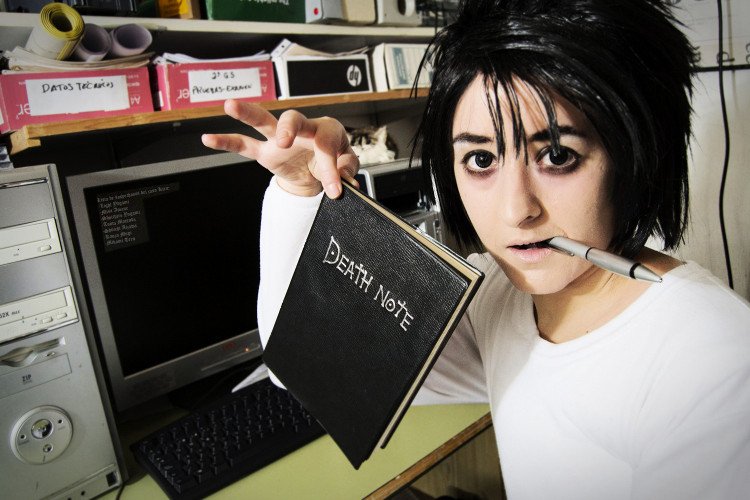 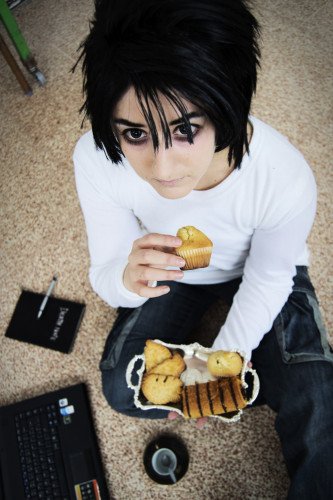 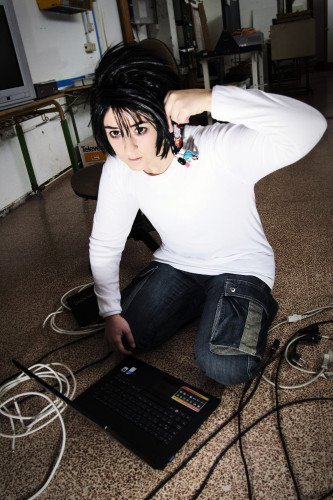