Despite recyclying a lot of fabric, base shoes, one contact lens (the blue one) and most of the make-up, the few things I had to buy were expensive. The wig, the curly ponytail, the two purple chinese ink bottles and the customizable small fangs took most of the price of this outfit. I haven been since 2012 or so trying to obtain the materials.

I bought the wig from my friend Mery, who lives very close to me. She also gave me her Gakupo cape and I used it in order to make the boots. I did the shoe cover and boot cover by separate. I sew some velcro to the shoe cover in the back of the feet and some elastic under the shoe to maintain the form. For the resto of the boot cover, I used some elastic on the top so they won't fall off. I also glued pieces of felt inside the top of the boot to maintain them stiff.

The trousers were very easy. I took the pattern from my Gaara/Sasuke pants and traced it onto the purple silk knit fabric, then sew it on and added velcro to the waistband. The black half-skirt was also easy. I recycled a lot of black tulle and gauze I had from ICO's Queen and sew it all together at different heights, forming a waterfall-like form in the skirt. I used a black ribbon I found in my house and used it to attatch the skirt to my hips.

Fortunatelly, I already had made a basic white shirt for my Riku Halloween Town cosplay in 2011, so I used it for this Gakupo version. I used the same fabric in order to make the white pieces of fabric he has on his wrists and the gorget. They can be put and removed, so the shirt can still be used for another characters. The pair of white gloves are a modified long white gloves.

I had to dye the curly ponytail because it came from a much lighter tone of purple. I literally painted it using 1 and a half bottle of purple chinese ink and a dyeing brush. I used some blue, translucent and white beads I had from my old version of summoner Yuna cosplay, attatched them to translucent nylon thread I had, and made the hair decorations. I put them on the wig using the nylon wire.

The jacket was the most difficult piece, so I made it the last. I recycled the black sailcloth we used for the background of our Shadow of Memories performance back in 2010, which was also used to dress the ICO's Queen in 2013. I obviously had to put it in the washing machine first, because it was pretty untidy. It was a lot of fabric (I still have more left over!) but it was painted on one side. So I had to fully cover it inside with black lining fabric. I used the pattern I traced for Levi's jacket (the elegant clothes, not the soldier's!).

Once everything was sewn, I traced a new pattern for the neck and the cuffs, cut the fabric and sewn everything together. I used some felt to stiff the higher part of the neck. I sew like 5 meters of dark golden bias tape to the jacket. The golden decorations on the neck were done with golden lycra and the reliefs were done with light brown relief painting. All the buttons I used were recycled, since we have various bottles of buttons in my house. I closed the jacket in the front with a big black press button. I used other smaller black press buttons on the neck so it would maintain itself opened to the sides, in its position. I recycled some golden, thin cord to make the decoration in the front of the jacket.

I had a pair of blue contacts, but this Gakupo version has one purple eye. So I bought the same kind of contact lenses (dolly eye +) in purple. I also bought the macaroon lilac nyx lipstick, which I can also use for another cosplays and daily wear. I also bought some small, realistic vampire fangs, which came with a mix I could prepare and use to fill each fang and adapt them to my own teeth. They can be put and removed withouth any glue this way. 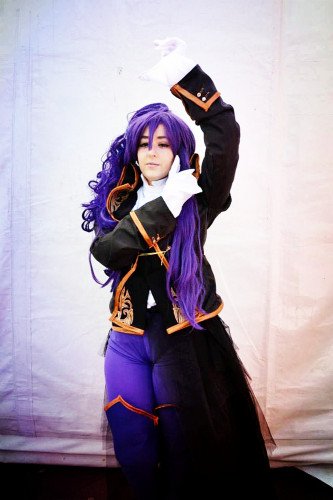 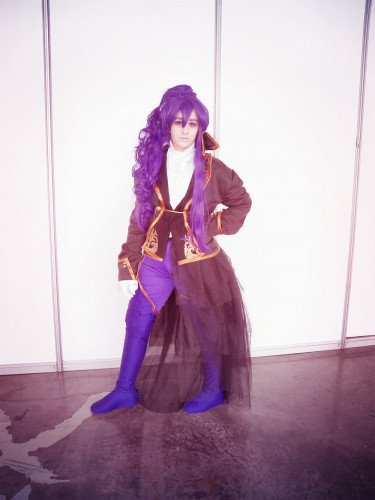 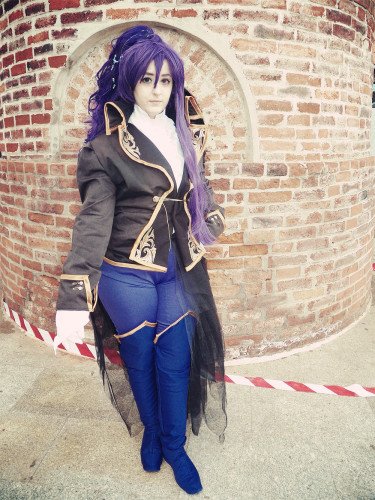