I love Chrono Cross as much as its predecesor - Chrono Trigger. And please never ask me which of the two I prefer because I'll never be able to choose! Harle's character has always intrigued me. She's so complex and not a character you can simply label 'the bad guy' - because honestly, she's not. The jester attire seems to be very appropriate, as jesters often represent a 'duality' of good and evil. Her mannerisms as well are a 'veil' to conceal herself behind. There is also much irony behind her being a victim of Fate, and opposing Fate at the same time - her purpose in life is to fulfill a mission but at the same time she ends up deviating from her own destiny, with feelings for the protagonist. She is a character of conflict. Besides, I do have a thing for characters that have an air of mystery and enigma to them. I always keep her in my party, from the moment she joins til she parts company with me after the Pearly Gates incident. Plus just look at her! TOO CUTE TO PASS UP. I have wanted to cosplay her since 2005 - I am really glad I waited eight more years when I had more sewing and costuming experience because this costume was a real challenge! I didn't settle for less than my personal best when making this costume - if I felt a stitch wasn't good enough or something had to be re-made, I went back and re-did it. As much work as this costume was to make, I had fun and somehow things went rather smoothly for me. It's my favorite costume so far and I'm so happy I'm able to say that, it's been on my mind for so long! The feeling of satisfaction I have with the end result...I can't even put into words. It's an AMAZING feeling and a big boost to my confidence.


For this costume, I decided to use foil dot spandex for the main fabrics covering the headpiece, along with the cape, bodysuit, gloves, and shoe covers - Harle is a colorful jester, and I felt these fabrics would be perfect, without being TOO much. It just makes the costume more fun. :) I chose a subtle pink fur to match the fur accents on her costume, which are certainly not white but often mistaken for white at a glance I suppose. The pink fur balls I used for the headpiece came a bit darker than pictured online, so I had to dye the fur a bit by hand with Prismacolor marker brushed through the fibers to make them match up better. I had three choices - CG art, concept art, or in-game sprite (all three have subtle differences, which drives me up the wall). I leaned more towards the latter as my main reference for this costume, with most of my reference coming directly from the in-game Harle.

Here's a breakdown of the costume.

Headpiece- Getting the right shape and sillouhette is a big deal for a successful Harle costume, so I really took my time on it. I was able to get the main headpiece down in one mock-up phase with hardly any issue, much to my shock. The 'horns' took a bit more trial and error to get the right shape and size (third time was the charm!), but it's such an important part of the costume that I didn't stop until I was 100% satisfied with them. The 'horns' are filled with pollyfill and the headpiece was constructed to be lightweight and stable at the same time, and as seamless as possible. I draped the fabric over the form of the headpiece to achieve this. The bells and floofy balls were purchased and sewn on. :) So the bells wouldn't jingle and bother me, I glued the smaller bell on the inside of it down to the inner bottom of the bell. The headpiece zips up in the back.

Pants - for the life of me I couldn't find a fabric perfect for her pants, and for years I have held off on this costume for that reason (among a few others). Most blue/green shots are either too light in color, too bright in color, or far too shiny. I finally found the perfect fabric and of course it was imported and even on sale it was $20 a yard. I eventually caved because I knew I would more than likely never find a fabric quite as suitable again. They are constructed like simple harem pants, with elastic at the top and bottom and lots of fabric - I used around 3 yards total just for the pants! :) The power of poof! The organza was very difficult to work with and fragile though, so I had to be careful when working with it and use a fine sewing needle. I used french (self-encased) seams for the pants to prevent fraying of the organza and provide a finished edge. I had to be cautious when adding the elastic that I did not rip apart the fine fibers, too.

Shoes - the shoes are customized elf shoes, that I covered in spandex with an elastic band up top to keep them from slipping. I then hand-made the fur trim and attached it by hand to the top of the shoe. I wanted to make this costume as cartoony as Harle's proportions in-game, which means oversized feet and hands!

Gloves - again, over-sized because of how cartoony Harle is (and a lot of the other characters in Cross, too). I patterned the gloves out myself. I gave enough allowance for my fingers, a bit longer than each of my digits. I wanted the gloves to look big but not so big that they were completley overwhelming and too comical. The petals involve 32 pieces - counting the lining and two sets of stablizer per petal. It was probably the most tedious task, though not all that difficult once I was able to figure out how to keep them perky. In some art, it's four petals, and in some it's two that are split in half in the center - to compromise, I made four petals, but joined each together towards the middle. Best of all (three of) the worlds! :)

Bodysuit - this was a challenge because of the seams and the placement of the gold trim with the lacing that loops in and out of the bodysuit and grommets. I was really glad to have a good amount of experience with spandex going into this. I made a mock-up to get everything situated with the seams and allowances, as well as shaping the 'scooped' neckline that extends over the sleeves. The gold trim is hand-made and the grommets were stablized with canvas fabric pieces while being set so they won't come out when the suit stretches. It was a pain to make sure that I had the placing of the grommets right, as well as the placing for the 'slots' in between the piping where the lacing slips into and out of. I also hand-made the lace-up cording to match, using the same gold metallic spandex. I opted out of the underboob gussets because those are only in the concept art, and quite frankly, I think it looks odd. The fur strips for the hip rolls was cut on the bias to allow for some stretch, then sewn by hand and trimmed to be fullest at the top of the hip. It is sewn onto the bodysuit by hand.

Cones - for me, they were the most difficult part of the costume. I am not much of a sculptor and making molds is nerve-wracking for me, because of how expensive it is to cast something. But since I needed an identical pair, and wanted to learn a new casting method, I went with it for these pieces. I made my own sculpt with modeling clay, poured a mold with Alumilite High Strength III mold maker, and then cast them once setting the mold with golden metallic powder and dying the resin yellow. I did a thin coating of resin in the mold and filled the rest with expanding foam - this method was used to ensure that the cones would be lightweight but durable. Each cone weighs only .04 ounces, which means it doesn't place a burden on the costume and is comfortable - two musts considering where they are positioned!

Cape - The cape was initially drafted on muslin draped over my dressform to figure out where everything needed go and how long everything needed to be so it would fall on me in the same places as the character. I had to back the hologram spandex with iron-on fleece so it would be stablized and not be stretchy anymore, which was a bit stressful and very time-consuming. It didn't want to stick to the fabric in some spots, so I had to stitch it around the edges so it would stay. The cape is fully lined, and closes up in the back and is aligned with the headpiece.

Gems - the gems were cast out of dyed acrylic resin - the 'dangles' on the cape also had to be created out of Sculpey, then I made a mold with Amazing Mold Putty and they were resin cast from that. The gems on the cape and headpiece are backed with a bezel I made out of Model Magic.


Makeup: I used Illamasqua in Pure White for the base of my makeup, and transulescent sealing powder over it. The blue and red markings were done with Sugar Pill pressed eyeshadow and Mehron makeup, and I also outlined my eyes with black eyeliner/masquara for my lashes. Lips were done with Ben Nye Creme Colors in blue. Ben Nye sealing spray was used to set everything once done applying it all.
est 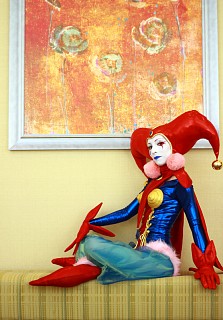 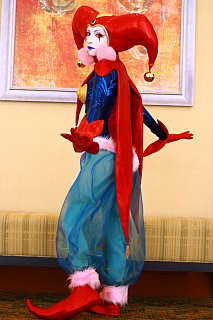 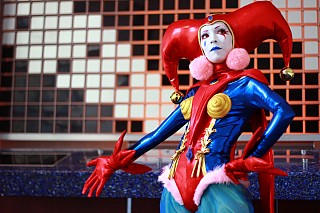 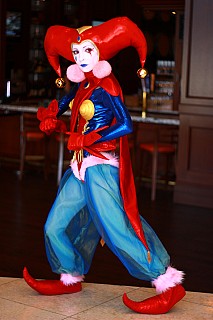 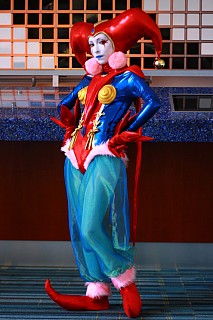 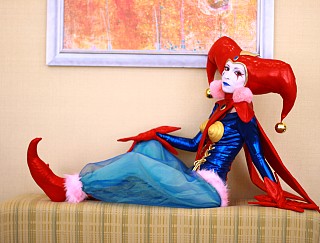 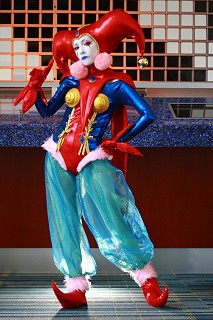 16bitlaughter this is totally wicked! I love the choice of fabric you chose!

LadyCrankypants This costume is SO FABULOUS! I can see why it was a dream costume forever, and you pulled it off flawlessly! Great work, you just look stunning :)