This costume was made from Micro-suede in Black and Tango Red. I used about 4 yards of each color. The tips of the tails are in White Micro-suede. I don't use the stuff very often and I thought it would be fun for this particular style of Harley. The coat is fully lined in white stretch sateen.

The coat was patterned by myself; splicing together 3 different patterns. 2 Vogue and one Simplicity. The diamonds were embroidered on using my roommates embroidery machine. I took a few liberties in the design since you can't see one side of Harley in the art. This is why the one sleeve has diamonds as well and also why the tails are not both red on the inside.

The hat was purchased and painted. It was originally black and I used Jaquard's Neo-Opaque Paint to make the top red and the bottom of the rim white. Black micro-suede scrap was used from the suit to make a band around the hat and a Joker Card was added to one side (just for a fun touch).

This was a Siam love child costume because Daguru helped me make the mold of my face, almost suffocating me in the process. The mask was molded by myself and I used the fan-art and the cartoon series art as reference. Later a negative was made by Daguru because of some time restraints on my part. Then the mask was made with the lovely Livid Doll's black latex she was willing to give to the cause.

The fetish shoes were purchased online because they were the closest I could get to the art works shoes. On the inside of the costume I am wearing a wife beater and some wonderful suspenders.

I used a Chibi from Arda Wigs in Platinum Blonde 081. All I had to do was pull the high ponytails down a bit so that the hat did not catch on them. I pulled them down and back and it was pretty easy to do. I was surprised.

This was my first BIG sewing venture. Never had I made something I've patterned by myself completely and used materials other then spandex or cotton. I pulled out seams sooooo many times. But in the end, its my proudest costume thus far.

Originally this costume was discussed by Penny and myself coming home from Youmacon 2009 and we'd both been sitting on materials for it since then. Together we kept eachother motivated through the costuming process. I'm just happy I got her in a red-headed wig and a green outfit. She's my little hottie! 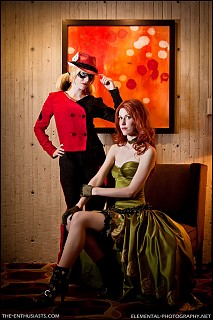 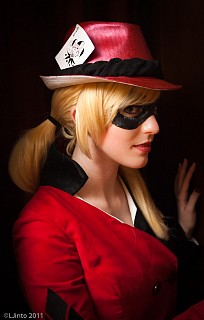 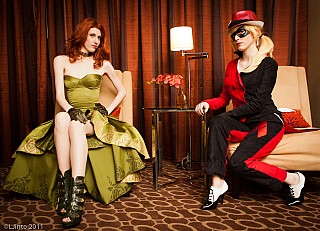 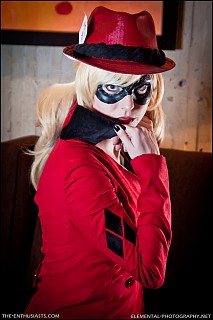 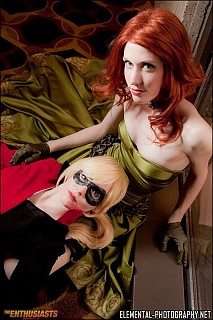 Enasni Oh my gosh, you guys look AMAZING. Absolutely amazing! My Ivy and I have been dying to do these costumes since the art was put up!