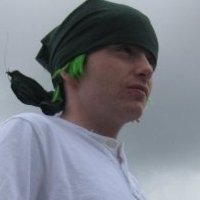 After getting hooked on Tales of Vesperia I decided on cosplaying Yuri.

The shirt is made from twill I believe. I made my own pattern for it based off of a shirt I had lying around. The designs on the shirt were appliqued on(my first time doing it). I ended up having to make my own bias tape so the trim would match with the applique but now I prefer making my own. To keep the shirt together I decided to just use velcro because I didn't think I'd be able to sew on a zipper without visible stitching on the trim.

The vest is made of twill with broadcloth for lining. The trim and designs are made of vinyl and were a nightmare to do. For the design, I couldn't do it like you normally would applique(heat 'n' bond then satin stitch). First I had to stitch down the pleather and then satin stitch it(soo aggravating). The designs for that and the shirt were done up in Adobe Illustrator and then printed and cut out.

The belt was some kind of tablecloth fabric(only thing I could find that was the right colour). I had to double up when sewing it together. After that I painted it then sealed it with clear nail polish. Once again, the design was done up in adobe illustrator.

The sword itself was originally a sword I had planned for a Bleach cosplay. That was made out of poplar and a little bit of craft plywood. All the holes on the handle were done with a drill press. I did the design of the guard up in illustrator. The sheathe was made out of 2 pieces of pine with the slots carved out with a router, lined with fabric and then glued together, planed to a thickness of 3/4 of an inch and then shaped. The raised gold details are made of styrene then heat formed, dremeled, and then bondoed for touchups.

The bodhi blastia is made of 4 bangles epoxied together and then layered with a whole lot of paperclay. The ridges along the sides were done with a dremel. After sanding it down I hotglued craft foam for the raised bits. I sealed the craft foam and paperclay with a mixture of water and woodglue to make it hard and smooth. After that I painted it and added the gems.

The boots were just a pair of dress shoes with bootcovers made of canvas added on. 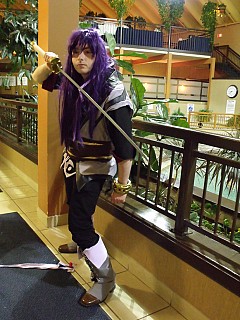 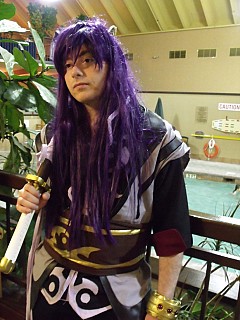 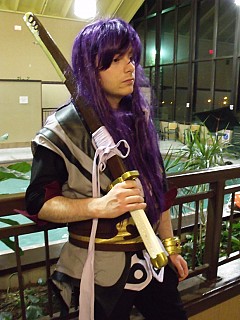