The crazy scientist and philosopher of the game. She is funny and weird as hell, but cute and lovely at the same time. I love her carefree and energetic character. She's my favorite female character of the Tales of saga.

The worst thing is that I had to make the wig, because it doesn't exist. This is my second time transforming a wig, althought this time I had to go beyond adding to extensions. I tried first to dye the pink to dark red, but it didn't work. I used alcohol mixed with red chinese tint and the tint didn't dye the wig. So I searched for three long, dark red hair extensions, sew them to the wig in three different places under the white part of the wig, then cut them to addapt the hairstyle, cut the white part and make the "ahoge". I used translucent elastic to make the ahoge standing up.

Pascal's clothes are really normal clothing, and it was fun to do. I made the patterns as a simple short and simple t-shirt with short sleeves and I used left-overs fabrics from other cosplays in order to do both of them, except for the purple fabric, which I bought. The suspenders were also left-over fabrics, and the green round things on them were translucent buttons painted with synthethic painting, mixing blue with green that I already had. I also used white thick wire to attatch the suspenders at the back, shaping it in triangle form.

I bought two medium translucent plastic balls, which can be split into half, for the balls on the bags. I also painted them with the synthetic painting (blue mixed with green). I sticked them to pieces of white foam left-overs (which I bought for Yuna's weapon). I made the bags with the purple fabric I bought and the yellow-orange part were also left-overs from other cosplays. I closed them with small sewn hooks.

The boots were made with left-overs from Hope Estheim's fabric (which I bought for his bags & boots) and the buckles were made with the white foam too. I used velcro to attatch them at the back, and left-overs of silver lycra from Beatrix's armor to make the silver decorations on the soles.

The two pair of gloves (light and dark green) were also made with left-over fabrics from other cosplays. I used a great pattern I found online for the dark green gloves. It's a Japanese pattern you can print, cut and use to make any kind of glove you want to. The light green fabric were just two tubes of fabric with elastic at the top, so it wouldn't fall. The shorts also have elastic and a beige piece of fabric, and the t-shirt has a white piece of fabric too on the sleeves. I used silk-knit for both t-shirt and shorts, since it's very comfortable.

The black pants are the ones I made for Gaara/Sasuke, and the turquoise scarf are left-overs of the knit-silk fabric I used for Jose's Chrono t-shirt.

The awesome weapon was made by my friend Cless. I made his Caius cosplay, alongside with my friend Humiure, so he made our weapons in exchange. I bought a 160 cm squared wooden stick and the base of the weapon was made by Cless with cardboard, thick white wire, paper tape, aquaplast and synthetic silver painting and acrylic green and blue paintings I already had.

I also bought an awesome pair of golden circle lenses. They are darker than the flashy yellow ones and I like that color better. 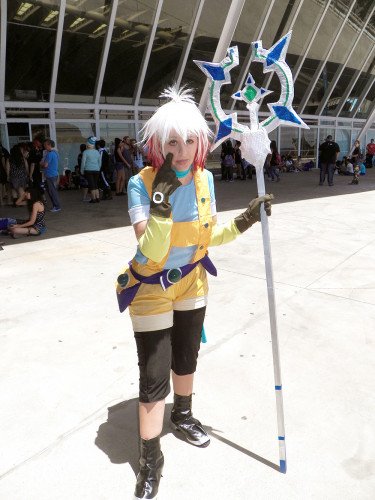 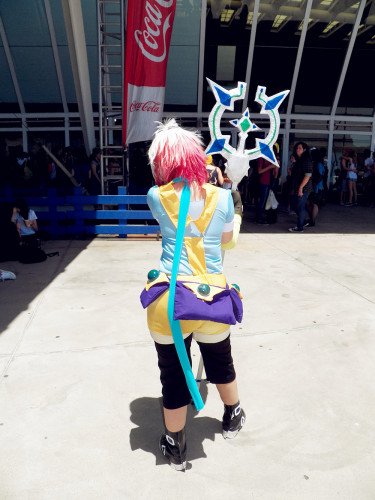 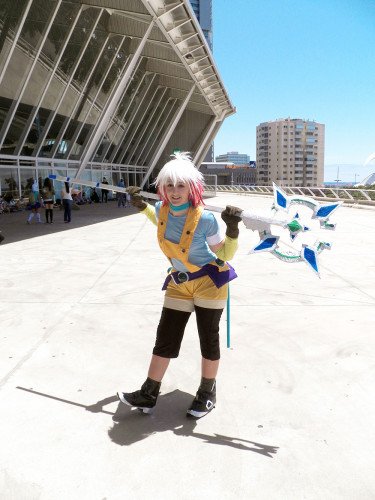