I really like Leones boyish, but such a big sister- like attitude. She kinda reminds me of Aelia from orginal Valkyrie profile. O.o So, it was quite a shock, when I found out, that she was actually Hrist. xD But that made her even more cooler x) I also always liked her outfit... Probably because, it´s simply not too... revealing. The way like many female Valkyrie profile characters use to dress :p

Pants are my old ones, I found from our loft... The fabric and color were a very much like Leones, so I didn´t need to make ones by myself... I just sewed those frames by hand on them :p I also painted my chainmail... I feel pretty bad because of it, because the real one would´ve look so much better. :p Well, I looked some of them from eBay and other net shops, but they were way too expensive for the poor student being. &gt;< Shoes are simple black boots, which I sprayed silver, and painted the details with black and golden paint.

I´m pretty proud of my props. (Mostly because I made them by myself. Lol xD) I really suck while making them xP But after listening Elffis prop lecture in Animecon VIII, I really wanted to try make one by myself at least once. (Elffi is famous cosplayer in finland, who is representing us in this year WCS 83)

Sword, shield, wrist -and shoulder armors has all made of the same material: Camping bed, paint, paper and masking tape. A lot and lot of it. xD Shoulder armors are maybe a little bit too big, if I have to say one thing, I would do otherwise... :p
I didn´t have much time before Tracon VI to order new wig, so I cut my old Garnet wig. It looked pretty nice, while it was on my wig head, but Leones hair style just doesn´t suit me. Well, at least I know now not to cut my own hair like that ever. xD 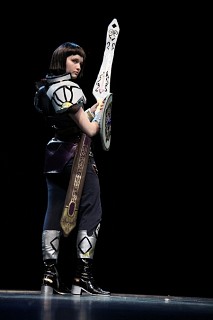 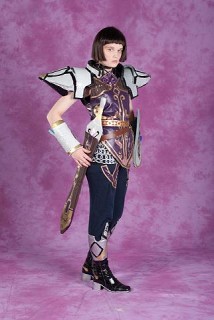 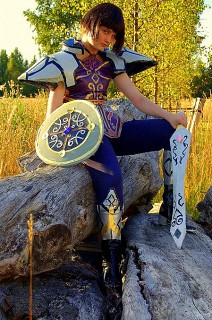 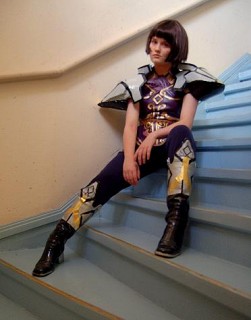 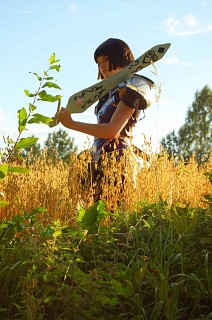 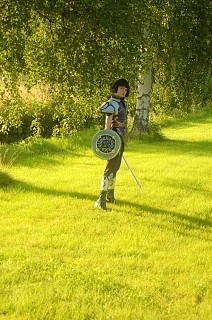