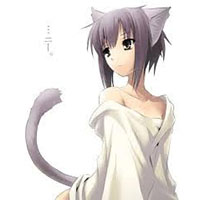 This cosplay has been really ambitious and is in 2 parts as a whole. The costume is one part and Kogoro (stuffed dog) is part two.

The costume itself was more or less time consuming than it was difficult . I created the corset out of faux yellow suede and pleather. In terms of the front, I used felt for the holes and leather cording for the tie. It took 2 hours and 15 minutes to make. For the sleeves, they're exactly the material as the corset with the same cording. I hand painted the trim at the bottom with acrylic paint. For both sleeves together, they took 4 hours to create.

Each strap on the corset are ridged ribbon that were individually created. They're all hand painted on with black acrylic paint. They each, including the sleeves, snap onto the collar itself.

The skirt is made of cotton fabric that had to be dyed a little darker blue. It was treated as individual sections as one skirt. The four individual panels were created separately and then attached on. Next, I created the fake belt buckles out of cardboard and Wonderflex. I took a 3" blue ribbon and created the design on the front. Lastly, I put on an invisible zipper at the top. The skirt overall took me 2 hours and 45 minutes to create.

The tan panels at each side were created individually and then added onto the skirt. They're They're faux suede and took me 50 minutes for both together.

So the costume by itself alone took me 10 hours and 50 minutes to create as a whole.

Kogoro, life size dog prop was originally going to be a puppet controlled by me; however, during the process of creating him, unfortunately, it didn't work out, so he became a stationary prop for me. He was built in 7 stages during the process.

Stage one was the skeletal aspect. That's made from 1" wooden dowel boards and wooden beads.

Stage 2 was the sculpting of the body shape as a whole. I used 14 gauge wire to create his body shape, then I also added his paws.

Stage 3 was the creation of his mouth/jaw. It's made of wire mesh, some paper mache, and Wonderflex. With that, the teeth and tongue were made from Polymer Clay.

Stage 4 was the creation of the head and attaching the jaw. I created the head by taking a balloon and using the 14 gauge wire to create a sphere like object. Then I took some more 14 gauge wire and attached the mouth like so.

Stage 5 was the foaming process; however, by the time I was foaming the legs, I unfortunately had to switch out the 4 dowel boards for his legs to 1/2" PVC pipe.

Stage 6 was pre-furring stage by using red, purple, and yellow felt fabric for the placement of each section.

Stage 7 was the complete furring and completion of the entire dog itself.

I had to add caster wheels on the bottom of his feet so he could be wheeled on stage at the Cosplay Contest. Unfortunately, because of his designs on his body, he's truly not meant to be on the convention floor; however, he's very much Cosplay Contest worthy on stage.

So, the total of hours on the dog alone is 75 hours and 5 minutes exactly.

In terms of overall construction time as a whole single cosplay unit is this. As a whole, it has taken 85 hours and 55 minutes to complete the entire cohesive cosplay. 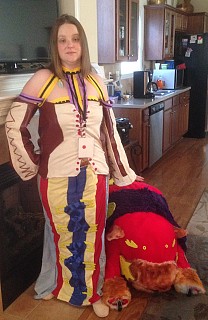 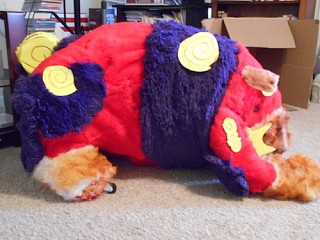