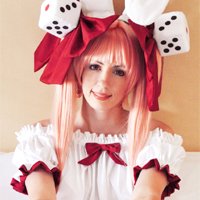 I've been kind of done with the Reborn! franchise for a while now, but I wanted to do another pair cosplay with my boyfriend for Otakon 2011. We decided that Reborn and Colonello would be fun, so we went with that.

The entire costume is cotton broadcloth, except a handful of the patches, which are black sateen. The patches and the "camo print" on the headband (which is almost entirely obscured by my wig) were done with fabric paint. It was really simple and easy to sew; it only took a few days to make the whole outfit. I re-used my Belphegor wig for this, too.

The props are what's really fun about this outfit. The pacifier is made of wood; we used a banister top for the ball, and two sheets of craft wood for the base. The little loop on the top is one end of one of those wooden "O" letters people hang on their kids' doors.

The sniper rifle was designed and built by my boyfriend, Hazard8726. The butt is poplar, the barrels are PVC, and the scope, end and trigger are trimmed pieces of plastic from shampoo and juice bottles. He worked very hard to make this rifle as accurate as possible, and did an excellent job with it. It does have those little "feet," too, but we decided not to put them on for Otakon because we were concerned they'd break off or hurt someone. 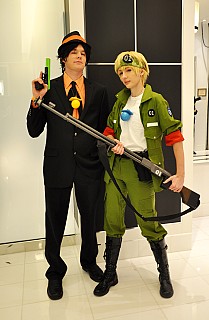 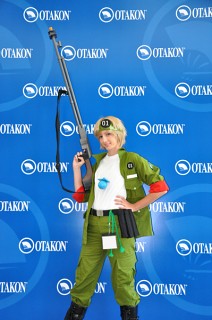