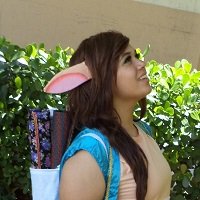 Okay, so I jumped back into cosplaying after about a year or two with this. I got the idea of cosplaying Sahara because I got rid of most of my cosplays and my friend and I wanted to go to a con. I wanted to have a cosplay, and I just thought since nobody's done a Saharah cosplay, I should make one. I had to think of a human design for Sahara because she's a camel.

The first thing I made was the dress. It's a really simple dress that I made from scratch. The fabric was originally white. I tried using brown RIT dye to make it a light brown, but it ended up being a light red. Be advised that unless you plan on dying something a dark brown, don't use brown RIT dye. I had to bleach the dress to a light peach and used a little yellow RIT dye to make it less red and more of a tan color. The bottom of the dress was tie-dyed green. Lastly, I added a bunch of green triangles to look like the grass in Animal Crossing. Then I sewed white felt to dress for the white belly.

The vest was simple enough. I used satin and to keep the fabric from fraying, I used clear fabric paint on the edges. I just hot glued the gold trim.

The backpack and carpets were really easy to make and probably the easiest part. The carpets are poster board covered in fabric. I rolled them up and glued some trim to the edges to look like carpets. The backpack was made of felt and I painted the edges of the flap, button, the pockets, and straps with fabric paint to look 2D. A bit of advice: Do NOT make backpack straps out of felt. The felt thinned out over time and I was terrified of my straps breaking but they didn't.

The ears are made from the same fabric as the dress. I glued pink felt to it and did a bit of shading in the pink to give it depth. I put some poster board in the ears to make them stiff and got them onto an old brown head band. 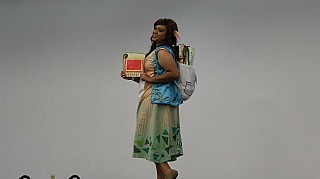 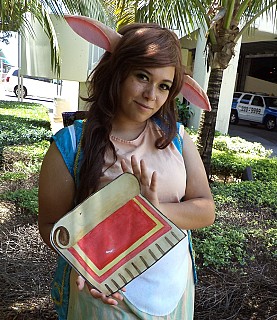 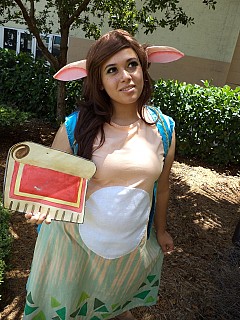 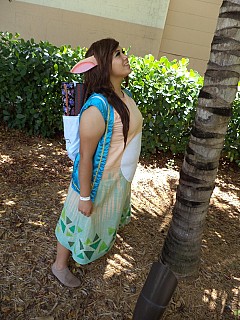 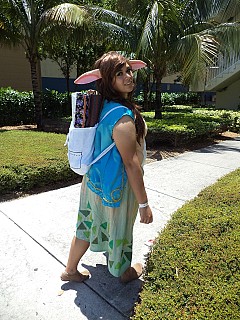