Jacket - This is the first time I've ever done double lining on a jacket before. Now that I see how nice it looks I may remake my obilisk blue jacket in this same fashion :D The top piece was "constructed" like a regular jacket with a few modifications(of course without a pattern).

The under piece is actually a vest which I used hook and eyes to close(very tedious getting that on and off <,<). I was actually surprised that sewing both pieces together made it still fuctional. I pleated once down the back on the outer piece while the underneath piece has many pleats. I have 2 golden buttons also pulling it in but its still thick enough to look like an epic trench coat like thing that it is :D

The small details at the corners and middle of the collar were sewed in with the sewing machine(because hand sewing on that fabric would drive me nuts <,<) and the cuffs were simple enough with 2 strips of gold around each cuff. The "button" things were made out of small christman ornaments that I cut in half as well as the bigger pieces on the epaulettes. I spray painted the christmas ornaments with a deep blue then I finished it off with some blue glittery nail polish that I used for my shirley cosplay last year :D Of course I glazed it to protect from any chipping, although those concerns will pop up later when I pack it.

The epualettes were made from foam craft board that I cut down to size with the kitchen knife. I then covered them with the same gold fabric I used on the shoes and bias tape. I used the same tassle from my original outfit of last year(well not that I had some left over) and then I covered that with left over bias tape for a clean look. Getting the bias tape around the cut in half christmas ornaments was really tedious I actually ran out of bias tape for where the star is and had to make my own bias tape from left over fabric.

The star was made also out of craft foam board but of a thinner type. I stenciled the star, then spray painted yellow. I went around the edges with a deeper color of gold, then I put valcro on the back and the jacket to attach the 2. The tassles that come across the front were cut specifically then taped at the edges to keep from fraying. I hand sewed through the tape(thimble on stand by of course) and then glued one side to the star and the other side to the epaulette and here's to a completed jacket and completed cosplay :D

"scarf" - well thats just the part that I stick in the jacket at the top :O

sash - The sash(I'll call it) goes over the pants and under the jacket. Just a simple sash that I sewed together 4 snaps in place connect it in the back leaving a nice smooth piece of fabric as the "sash"

Pants - Making pants is usually a pain in the butt. Making this pants were no different. So I started on the pants in my basic manner, took them in and sized them out. Then I went down both sides(specifically on the seam) with gold ribbon.

The same fabric used for the sash was used for the upper part of these pants. For the knee pads I just used yellow fabric and gold for the star because I wanted to kinda keep to a specific color scheme. I have pieces of elastic on the bottom because when I put the pants on I didn't wanna have to bend down and tuck them back in(considering how inflexible they are). They also zip in the back which the zipper is hidden by the jacket :'D And also visibly enough they're like super high waist.

Boots - The boots are 3 inch heal boots which I did full boot covers for. The boots originally were white but since it was more like an off white I felt it necessary to make it WHITE white. The gold strips were were bias tape as well as the pieces that went around. The gold at the bottom of the boot was of a similar fabric

Star swords - These actually took me a whole month to do which is why I started on them way early. I used wood, LED christmas lights(because I'm a cheapo), wire, polycarbonate sheets, green and blue duct tape, and ironically cello wrap.

I started wit the 2 pieces of wood which I picked up from michaels in a cross like formation for the base. Then I used green and blue duct tape to help distinguish the 2 from each other for further progress. Then I took out the christmas LED lights. Because REAL LED lights will run me way over budget for this cosplay even though it would look better. I wrapped around 2 sets of the LEDs on each sword and then wired them down(because they stick out, they ARE christmas lights after all) wit green and blue colored wire.

I'll need 12 AA batters in total for the epic light up effect -.- Continuing on I found a nice store online that sells the polycarbonate sheets. I used the glue gun to glue each piece while making a hole for the battery pack(lord knows how I'm gonna get the batteries to stay in -.-). Lastly I got the clear cello wrap from the dollar store and used that in green and blue to finish them off. I coulda spray painted but this I feel was kinda lower maintaince. They light up pretty nicely if I do say so myself :p

Gloves - Hand sewed a pair of gloves, traced my hand obviously. I used a stretch knit for this which is the same fabric I used for my Larsa gloves :O 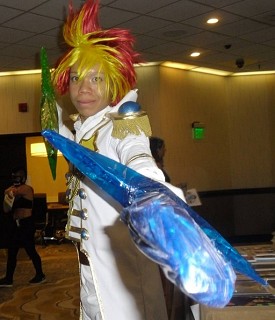 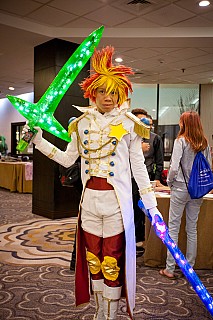 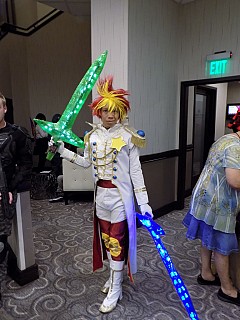 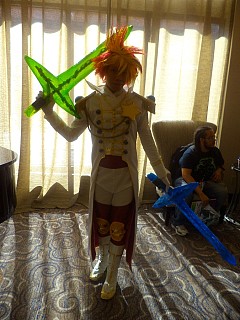 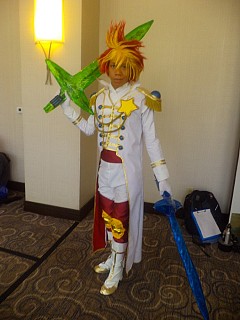 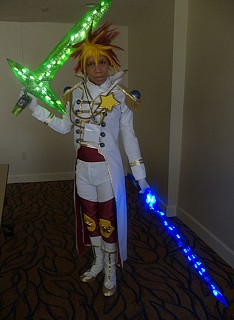 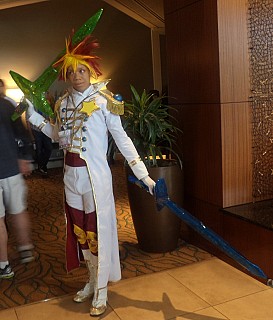 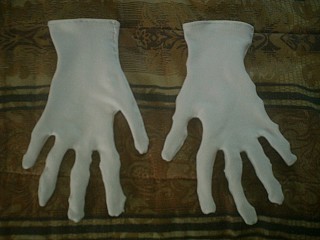 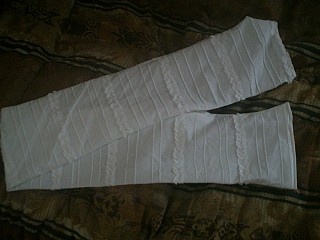 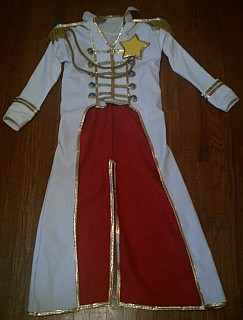 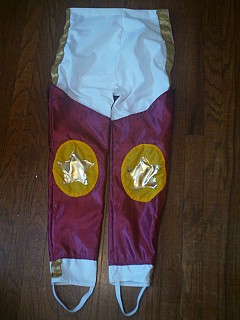 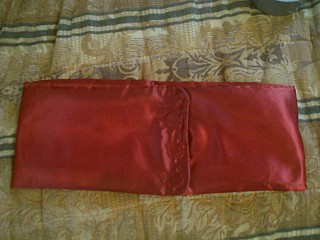 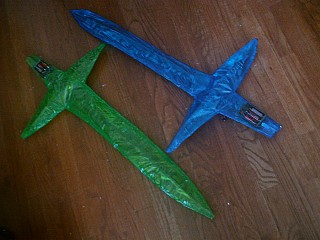 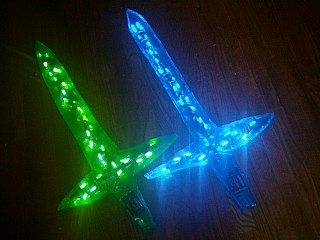 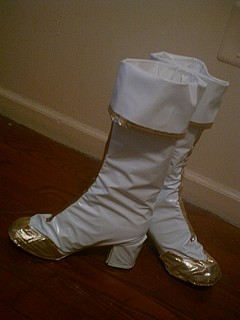 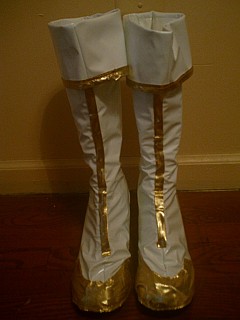