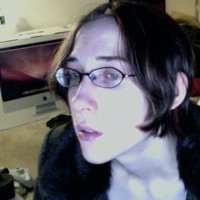 I made the wings small (obviously). I still managed to beat a couple people over the head with them; they kept going lopsided. I can think of several changes I'd make to the wings if I decide to use this cosplay again.

Horns were a last minute venture after the original headpiece broke completely (a day before convention).
Ended up remaking the horns out of aluminum foil covered in masking tape and papermache. I had no time to sand it, so they ended up lumpy as hell.

I bought a cheap pair of vinyl pants and just GLUED faux fur to the whole thing. As hilariously dumb as it sounds, I thought the pants ended up being the best looking part of the costume (and it took a lot of time - had to cut the fur into panels).

Just made the feet out of an old pair of shoes. Glued some fur on that and made the claws out of paperclay.

Costume isn't perfect, but it was still fun. :D

Definitely revamped this one. I have a lot more to fix on the costume, but I've redone the wings, horns, and shoes. :D 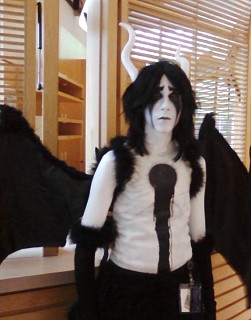 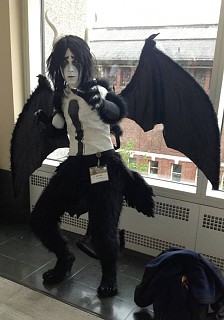 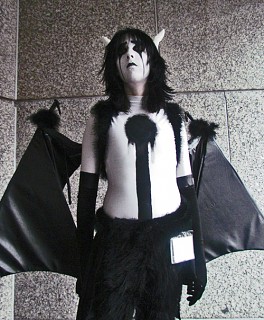