I loved this character a lot! She is cheerful, crazy but at the same time, she can be responsible and serious if it is needed. This is probably because the scaredy cat attitude she shows sometimes. Leia is very unique and a very realistic character. She is also strongly friendzoned and badly treated, which I think she doesn't deserve at all. I hated Jude because he was so rude to her, and because he is very superficial and only likes Milla because of her looks. It is insulting to Milla because she is also an awesome girl! One of the coolest Tales of girls, if not the most!

Ok, this cosplay was HELL to make. I thought it would be easy but no. The clothing is WEIRD, like, lvl 100 weird. No sense at all. I had to deduce that the black thing was a short jumpsuit and the "dress" is really a haori with western long sleeves. Like the sleeves of these little girls dresses. So that is what I decided to make.

Of course I did the pattern first. The pattern for the short jumpsuit was done by tracing the pattern out of a pair of shorts and a tank top. This way I obtained the front side of the pattern. In order to make the back, I took measures from my neck to the lowest part of my back and the width of my back from the center to one of the sides. I traced the same pattern and made a hole in the back, because the back of Leia's outfit is completely bare. This way I obtained the back side. So, I traced the patterns into the fabric, cut and sew. I also stretched the fabric in the back so the jumpsuit could be adjusted to my waist, or else I would look like a sausage.

In order to make the beige haori, I took my measures and did the front pattern, then I did the same for the back. I drew the triangles once the patterns were completed so they would look in place. I did also the sleeves and sew them inside the haori's sleeves. Then I had to make ALL the ornaments of the cosplay. This was way tiring and I thought I would never finish, since Leia's cosplay has a lot of tiny details everywhere. I was pretty lost at first so I decided to make all the yellow decorations of the haori. The hardest part was making those weird spades at the front, but the rest were just a straight line through the borders of the haori and a few circles on certain points. I sew everything on with zig-zag stitching. It was pretty tiring but the result was good.

Then I made the obi. I used the same technique I use for all the obis: two layers of the chosen fabric and an inner layer or two of felt. I sew everythin together and added three pair of hooks to close it at my right side. The decorations of the obi followed next. I used some orange cord and sew it on the obi. Then for the rounded thing I used two layers of thin foam core and painted it turquoise. For the beads, I bought a packet of fimo and used the whole of it for the seven beads. I had to do them because they had to go inside the thick cord and normal beads holes are too tiny. I painted the fimo pink with nail polish.

Then I did the head ornaments. I bought a base white hairband, covered it with elastic beige fabric and contact glue, then I proceeded to make all the dark brown decorations with lycra. I cut two pieces of lycra and make all the holes. My hands were destroyed after this. I glued the two pieces to the hairband. I cut 8 rectangles of lycra and 4 rectangles of felt. I did the same tecnnique I did for the obi to obtain 4 rectangles. I sew them in the middle, then attatched 2 rectangles together to obtain the 2 bows. Then I proceeded to cut stripes of the lycra fabric in order to make the braids. Once they were made, I cut the left over ends and made a knot so the braids wouldn't come off. I also did the flowers with pink and blue felt, the brown lycra and silver 3D painting. I sew the flowers to the braids and bows, then sew the braids to the bows, and the bows to the hairband. Hairband finished!

Next thing I made: the boot covers. They were pretty simple: just cut four inverse trapeziums, sew two of them together to obtain both boot covers. Then I cut all the holes they had in the lower part. Hands destroyed again! Once I finished that, I made the 4 pompoms with fabric and filled them with wool yarn, then I sew each pompom to a white cord, then used those cords to attatch two of the pompoms and made each bow. This way is safer, since wool yarn pompoms would get totally destroyed if I used them on my feet just with walking.

Then I made the wings. This was pretty easy. Just needed to take measure of the lenght and width needed to adjust them to my body, made the pattern on paper, then traced the pattern on plastic. This plastic is very pretty. It is sold in the fabric store and it changes colors with the light. I cut each wing and attatched them using more plastic. I had to use staples and translucent adhesive tape in order to put everything together, since glue destroys this material completely. One day I will find an approppriate glue, I swear. I also stapled a piece of black elastic so I could attatch the wings on my neck. Yes, the wings are attatched around her neck, it is on the official artbook. I was like WTF, Namco, you want to kill cosplayers.

Luckily, Leia has a beautiful necklace to cover that mess. I made the necklace with two pieces using the left overs from the black elastic fabric I used for the jumpsuit. I cut two layers, sew them together, cut the little triangles and added the button and a piece of black velcro so I could open and close it easily. For the silver decoration, I used the silver 3D painting.

Finally the weapon. I love making staffs. Don't know why, but it is so funny and entertaining to me. To make thick staffs like Leia's, I use the cardboard tubes that the fabric stores throw off once the fabric rolls are over. They are pretty thick and resistant! I paint them with synthetic painting since it makes them even more resistant. In this case, I used red synthetic painting. Then I did the black things with eva foam. I made the pattern first, then traced it in foam and cut 4 pieces. I glued the pieces around both sides of tube (already painted and dried). I used translucent contact glue on each piece and a lot of clothespins to maintain the foam together until the glue was dry. Then I used varnish on the 4 pieces of foam. This way is easier to paint! Once the varnish was dry I painted the pieces in black. Once the black painting was dry, I painted the green and red decorations. Once the green and red painting was dry, I used spray varnish to protect the foam and painting.

Voilá, cosplay finished! It took me three whole weeks to finish it. Even though I went with a whole Tales of Xillia group to the cosplay contest, my cosplay was the hardest to make. I can't still understand it :v 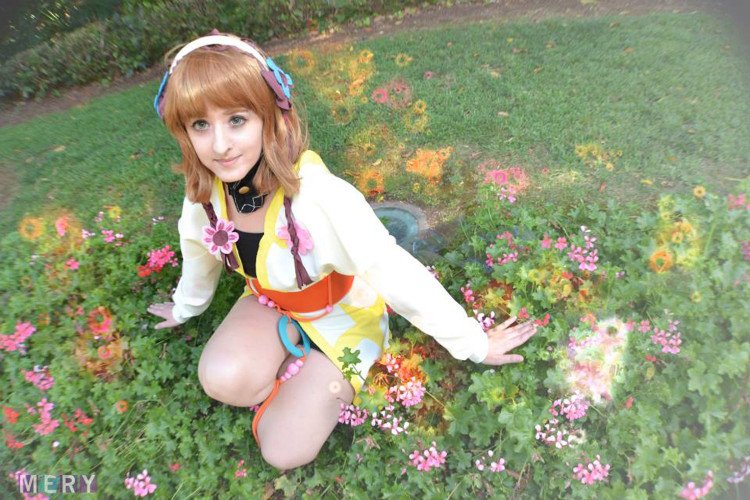 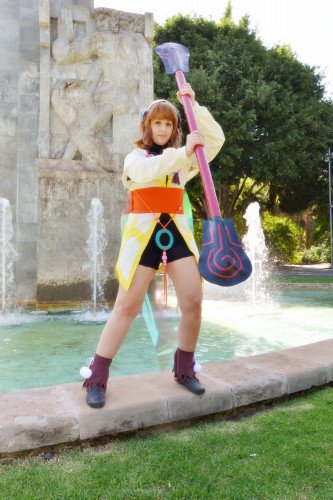 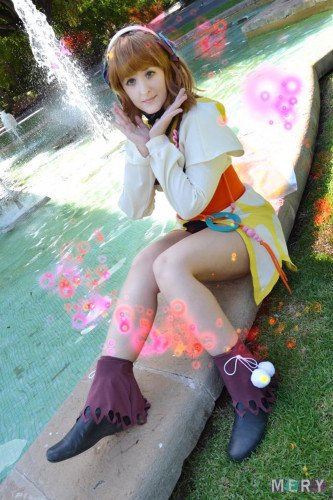